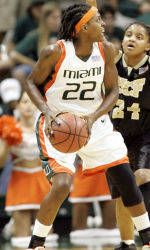 The Game
In what will be UM’s inaugural ACC home opener, the Hurricanes (8-6, 0-1 ACC) welcome Wake Forest (11-4, 0-2) to the Convocation Center Thursday, January 13 for a 7 p.m. tip-off. This will mark the third meeting all-time and the first meeting since 1993 between Miami and the Demon Deacons, with the two schools splitting one game apiece in the two previous meetings. Thursday’s game will be carried live over the airwaves on WVUM (90.5 FM) with Jeremy Marks-Peltz and Mike Lopez calling the action. Tickets are $5 for adults and $3 for children and seniors and can be purchased through the Hurricane Ticket Office at 1-800-GO-CANES or on the web at hurricanesports.com.

The Hurricanes
The Hurricanes return to Coral Gables Thursday after snapping a five-game win streak Sunday, January 9 with a 65-56 loss at Florida State in their ACC opener and will look to improve on their unbeaten mark of 7-0 in home games this season against Wake Forest. Averaging 66.3 points per game on the season, Miami is turning in 72.5 points per game over their last six games. The Hurricanes are led by junior All-America candidate Tamara James, who leads the nation averaging 24.4 points per game and tops the team with 6.6 rebounds per game. James is also seventh in the ACC in field goal percentage, connecting on 53.0 percent of her shots. Senior Yalonda McCormick sits second in the conference in both assists per game and steals per game, averaging 5.92 and 3.38 per game, respectively. Sophomore Amy Audibert and freshman Albrey Grimsley have also played well as of late with Audibert shooting 52.4 percent from the field over the last six games and Grimsley averaging eight points and 4.7 rebounds per game during the same stretch.

Wake Forest
Head coach Mike Petersen and the Demon Deacons head to Coral Gables with an overall record of 11-4 after snapping a three-game losing skid with an 86-37 win over Savannah State Monday night in Winston-Salem. Wake opened the season with an eight-game winning streak, including a 65-57 win over then No. 15 Houston Dec. 17, and have since gone on to lose four of their last seven. The Deacs have two of the ACC’s top scorers in junior Cotelia Bond-Young, who’s 16.5 points per game is fifth in the conference, and junior Liz Strunk, who ranks 10th with 14.5 points per game. Bond-Young’s 49 three’s on the year also leads the conference while WFU’s 133 team three pointers tops the ACC. Senior Erin Ferrell is second in the ACC with 7.7 rebounds per game while sophomore Porsche Jones ranks fourth in assists per game (5.33 apg) and third in steals per game (3.27 spg).