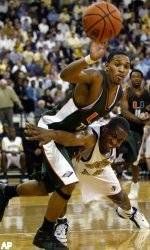 Georgia Tech (10-2, 1-0) bounced back from an overtime loss at No. 2 Kansas,the game Elder left after hurting his left hamstring. The team’s second-leadingscorer is likely to be out through the weekend.

“With B.J. out, I had to be more assertive,” said Bynum, who did more thanjust score – he also had seven assists.

“I like those seven assists better than the 21 points,” he said. “And noturnovers.”

The Yellow Jackets built a 14-point halftime lead and held off Miami’s surgein the first 5 minutes of the second half.

Luke Schenscher scored 15 points and Jarrett Jack, who had a huge gameagainst Kansas, chipped in 14 points and a team-high nine rebounds.

Not surprisingly, Georgia Tech seemed to have a bit of a letdown aftersquandering a 16-point lead to Kansas last Saturday. The Yellow Jackets lost70-68 in overtime, falling to the team they beat last year to reach the FinalFour.

“I was glad to get back on the court,” coach Paul Hewitt said. “It wasprobably the hardest, toughest regular season loss I’ve ever experienced.”

The Hurricanes (9-3, 0-1) moved from the Big East to the ACC this season – afootball power hoping to make a mark in a league known for basketball. Theycame into their conference debut with an eight-game winning streak, includingan upset of Florida, but couldn’t keep it going despite Guillermo Diaz’s 27points.

Good thing the Yellow Jackets had Bynum. The senior guard went 8-of-15 fromthe field and kept the Hurricanes off-balance defensively.

When they got in his face, he sliced to the basket to set up a shot forhimself or a teammate. When Miami backed off, Bynum went to his jumper, makinga couple of 3-pointers.

“He’s becoming a complete player,” Hewitt said. “Last year, there weretimes when I wasn’t comfortable putting him out on the floor for extendedminutes if he wasn’t scoring.”

The Yellow Jackets led 46-32 at halftime, seizing control with a 14-1 spurt.They got big contributions from their freshmen – Anthony Morrow hit a couple of3-pointers, while Ra’Sean Dickey converted a three-point play and assisted onone of Morrow’s long-range jumpers.

Morrow finished with 11 points in a season-high 24 minutes, while Dickeymade the most of his 9 minutes – six points, six rebounds and two assists.

Looking for the bright side to Elder’s injury, Hewitt believes it can givethe Yellow Jackets a chance to develop more depth for the brutal ACC schedule.

“Obviously, B.J. is very, very important to us because he can carry us onany given night,” Hewitt said. “While he’s out, other guys are going to havean opportunity to gain some valuable experience that should help us as we movethrough the season.”

Miami got back in the game with a 15-2 run to start the second half. Diazgot it going by swishing a 3-pointer, and Anthony King pulled the Hurricanes to48-47 when he spun around Schenscher for a lay-in.

Isma’il Muhammad was called for an intentional foul when he knocked downDiaz from behind as the Miami player attempted a layup. Bynum went in boldlyfor a dunk, only to get stuffed by King. Finally, Muhammad missed one of histrademark dunks, looking around incredulously for a foul call that never came.

But the Yellow Jackets never surrendered their lead. Bynum hit a shot in thelane, the first of five straight Georgia Tech points. Miami’s momentum wasstymied, and Jack finished off the Hurricanes when he sank a 3-pointer with2:25 remaining to make it 75-64.

“It’s very important that we kept the lead,” Tech’s Anthony McHenry said.”When the lead changes, the momentum changes. It can be devastating to ateam.”

Diaz did everything he could to pull off the upset. The sophomore guard hitseveral acrobatic shots that drew gasps from the crowd at Alexander MemorialColiseum, equaling his career high for points.

“We know we can compete with anybody in the ACC the way we played in thesecond half,” said Robert Hite, who added 13 points for the Hurricanes. “Wewere right there.”