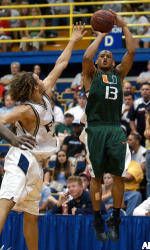 Harris And Hite Team Up For 54 Points

After averaging 69 points through the first 5 games, Miami (4-2) scored 80 thanks to 12-for-25 shooting from 3-point range as the Hurricanes beat FIU for the ninth time in the last 10 meetings.

Trailing 40-27 at the half, FIU (3-3) played even with Miami after halftime thanks to 17 points from Ivan Almonte, who finished with 22 points and 11 rebounds. The Golden Panthers cut Miami’s lead to 14 six times throughout the game, but never pulled closer until game’s end.

The Golden Panthers led early, building a 16-12 lead with 10:15 left in the first half as the Hurricanes shot only 39 percent.

Miami tied the game at 16 when Hite caught a pass from Harris in mid air and finished with a dunk while being fouled. Anthony King put back the missed free throw for a 17-16 lead and Miami never trailed again.

That started a 26-11 run for the Hurricanes, who finished the half with a 13-point lead. Miami shot 52 percent for the half.

Junior Matias also scored 21 points off the bench for FIU while Ismael N’Diaye had 10.