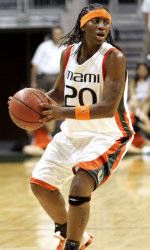 Hurricanes Edged Out by FIU

James led the Hurricanes (3-4) with 24 points, scoring 16 in the second half, while McCormick and Grimsley added 10 and 14, respectively. McCormick also had a season-high seven steals.

James and Grimsley each had eight points in the first half, but FIU’s Tomova scored 18 to help give the Golden Panthers a 36-27 lead at the break.

James and Grimsley combined to score 14 points to open the second half, cutting the FIU lead to one point at 42-41 with 15:26 remaining.

Trailing by seven with under six minutes to play, the Hurricanes chipped away at the Golden Panthers’ lead, coming as close as three points at 60-57 following a lay up by senior Yalonda McCormick at the 4:42 mark.

McCormick cut the lead to two two minutes later, hitting a three to bring the score to 62-60 with less than three minutes left to play.

Down by three at 65-62 following a pair of free throws by Grimsley, McCormick pressured FIU’s Faeza Bouderra into a turnover to give the Hurricanes the ball with just over 20 second left.

McCormick brought the ball down the floor and took an open look from behind the three point line to tie the game with 13 seconds remaining but could not connect. The Golden Panthers sealed the victory with a pair of free throws to hand the Hurricanes the 67-62 loss.

The Hurricanes return to action Monday, traveling to Lubbock, Texas to take on No. 12 Texas Tech at 8 p.m. (EST).