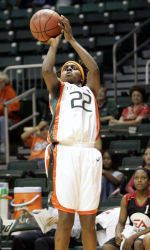 The University of Miami women’s basketball team will head across town Saturday night to take on Florida International at 7 p.m. at the Pharmed Arena.

The Game
The Hurricanes (3-3) head across town to take on inner-city rival, Florida International (3-2) Saturday evening at 7 p.m. at the Pharmed Arena. This will mark the 50th meeting between the Hurricanes and the Golden Panthers. As UM’s longest running rivalry, Miami and FIU have squared at least once every season since 1975 with the Hurricanes holding a 30-19 advantage in the all-time series. The game will be broadcast live on the WVUM (90.5 FM) and can also be heard live on hurricanesports.com.

The Hurricanes
The Hurricanes will look to bounce back from a disappointing 60-35 loss at George Mason Tuesday night in their last outing. After opening the season with two wins, including a 68-57 victory over now No. 22 TCU, the Hurricanes have dropped three of their last four games – all of which have been on the road. Player of the Year candidate, junior Tamara James enters the game as the ACC scoring leader, averaging 21.3 points per game. James has led UM in scoring in five of the six games this season, including a 30-point outing at Hartford (11/23). Junior Tatjana Marincic leads the conference in free throw percentage, going 12-of-12 from the line this season while senior Yalonda McCormick enters the game needing just one steal to move into sole possession of sixth place all-time at UM.