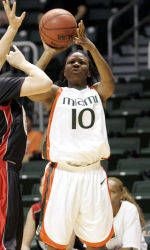 Hurricanes Come Up Short in 79-73 Decision to Oregon

BROOKLYN, N.Y. – The University of Miami women’s basketball team could not overcome a 53 percent shooting performance from the field by the University of Oregon Friday night, falling to the Ducks, 79-73, in the opening game of the LIU Turkey Classic in Brooklyn, N.Y.

The Hurricanes’ (2-2) Tatjana Marincic, Tamara James and Yalonda McCormick each scored double figures against the Ducks (3-0) with 16, 22 and 18, respectively, but it was Oregon’s Eleanor Haring who would help hand UM the loss, pouring in 21 on a 10-of-11 outing from the field.

The two teams would trade baskets throughout a first half that featured 11 lead changes with neither team leading by more than five points. Trailing by two points with less than a minute remaining in the first half, Marincic drew a foul and hit a pair of free throws to knot the score at 30-30 before a Haring lay up with 17 seconds left gave Oregon a 32-30 lead heading into the intermission.

Wagner scored five points a little over a minute into the second half as Oregon jumped out to a nine-point lead at the 17:30 mark.

Down by 11 on the heels of a 8-2 run, the Hurricanes chipped away at the Oregon lead, scoring 11 unanswered points, tying the game at 47-47 when James found an open Marincic in the corner for an three with 11:43 remaining.

The Ducks answered with seven points over the next two minutes to lead by five before a McCormick three and jumper by Katie Hayek tied the game for the eighth time at 54-54.

Wagner once again helped to pull Oregon ahead, hitting back-to-back three’s to help put Oregon up 62-57 at the 6:47 mark.

Trailing by seven with just over six minutes remaining, Marincic once again hit two free throws followed by baskets from McCormick and James to bring the Oregon lead to just one at 66-65 with under four minutes left on the clock.

Oregon outscored UM nine-to-two over the next two minutes to take the lead 75-67 with 1:21 remaining and would hang on to clinch the 79-73 victory.

McCormick finished the game with her first double-double of the season, adding 10 assists to her 18 points while Amy Audibert led the Hurricanes with nine rebounds in the first start of her career.

The Hurricanes will take on Maryland Eastern Shore, who fell to host Long Island Friday, in the consolation game of the LIU Turkey Classic Saturday at 2 p.m. Saturday’s game with UMES can be heard live on WVUM (90.5 FM).