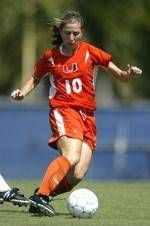 In what will be their inaugural season in the Atlantic Coast Conference, the Hurricanes’ 2004 slate includes eight teams that were either ranked during the course of or finished the 2003 season in the national top 25 polls, including 2003 National Champions North Carolina.

Miami opens the 2004 season with a ten day trip to Brazil, Aug. 10-20 before returning for a match at George Mason, Aug. 27. The Hurricanes then take to Charlottesville, Va., Aug. 29 to take on a Virginia team that finished the 2003 season ranked 10th in the country.

The Hurricanes lock up with Wake Forest, Oct. 10 following the UNC match and return to Coral Gables for the final two home matches of the season, hosting cross-town rival Florida International, Oct. 12 and Central Florida, Oct. 21.