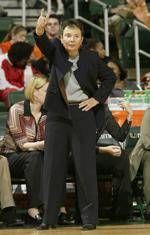 CORAL GABLES, Fla.-The University of Miami women’s basketball team (22-6) will travel to face Maryland (17-12) in the first round of the NCAA Tournament next Sunday (March 21) at 7 p.m. EST at the Pete Maravich Assembly Center in Baton Rouge, La. The Hurricanes are the No. 5 seed, while the Terrapins are the No. 12 seed. The game will air live on ESPN2.

Thirty-one conferences were granted automatic bids for the 2004 championship, and the remaining 33 teams were selected at-large. The Big East Conference placed the most teams in the championship bracket with eight, followed by the Big 12 Conference and the Southeastern Conference with seven each.

Miami and Maryland both received at-large bids into the tournament.

The other first-round game in Baton Rouge matches No. 4 seed host LSU (23-7) against No. 13 seed Austin Peay (23-7). Sunday’s winners will meet Tuesday (March 23) to determine who advances to the West Regional at the Bank of America Arena in Seattle, Wash. March 27 & 29.

The Hurricanes are making their sixth NCAA appearance and second in a row. Miami entered the tournament as the No. 11 seed last season. The Hurricanes faced host New Mexico a No. 6 seed in the first round and fell 91-85 in overtime.

Maryland is making its 13th NCAA appearance and its first since the 2001 season.

Tickets for first and second-round games are currently available online at www.lsusports.net.