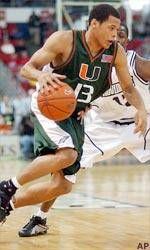 Canes Dropped By No. 19 Providence

His concern seemed evident Saturday as Miami played No. 19 Providence tough,even taking the lead in the second half, before the Friars pulled away for a70-57 victory.

“That’s the way the schedule goes,” Welsh said. “Good teams fight throughit. We didn’t have that crispness that we usually have, but we tightened up thedefense when we needed it.”

Rob Sanders scored 14 points to lead five players in double figures forProvidence, which has won four in a row.

Providence (18-5, 9-3) remained in second place in the Big East and matchedthe 2000-01 team for the school’s best conference start.

A 3-pointer by Donnie McGrath, who had 13 points, gave Providence the leadfor good at 49-47. It was 50-47 when Sanders grabbed the rebound of a missedfree throw by Tuukka Kotti and kept possession for the Friars.

After a timeout, Sanders followed his missed 3-point attempt by convertingan opposite hand layup to put the Friars up 52-47 with about 11 minutes left.

Miami never got closer than three points the rest of the way.

“Maybe they took too much out of us (during the lead changes),” Miamicoach Perry Clark said. “Our defensive intensity was not the same (afterthat). We got our backs against the wall.”

Sanders had his best game since returning from two broken fingers on Feb. 1.

Providence led 35-26 at halftime, but a 3-pointer by Hite with 13:52 leftgave Miami its first lead since 1-0. The lead changed five times over the next4 minutes.

“We didn’t bring any energy out of the locker room, and we’ll addressthat,” Welsh said. “We were one or two possessions from going man-to-man.”

Ryan Gomes and Sheiku Kabba each had 11 points for the Friars, while Kottiadded 10, including five points when the game hung in the balance.

“That’s something I have to do,” Kotti, a reserve, said. “If other guysdon’t get it going early, I need to bring in some energy. I was able to havesome success at both ends (today).”

“It wasn’t just Ryan and Donnie,” Welsh said. “Everyone made plays.”

Darius Rice, Miami’s leading scorer at 16.7 points per game, did not play.He’s been out since spraining his foot Feb. 14 against Syracuse.

Clark thought about inserting his star when Miami got close.

“I made the decision not to play him,” Clark said. “I was worried about apossible setback.”

Rice, a senior, said he wanted to play.

“I would have added energy on the court, but I have to respect the coach’sdecision,” he said.