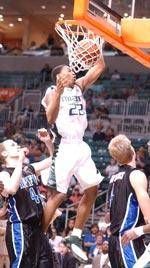 Canes To Try Their Luck Against Irish

ON NOTRE DAME:
Notre Dame enters its match-up with Miami with a record of 9-6, 3-2 in the BIG EAST, following a 71-63 home loss against 9th-ranked Kentucky on Sunday.

The Fighting Irish have been led this season by the inside-outside combination of point guard Chris Thomas and power forward Torin Francis.

Thomas leads the team in scoring at 19.3 points per game and is handing out a team-best 5.5 assist per contest. Thomas has scored 20-or-more points in four of the last seven games.

Francis is averaging a double-double this season at 15.6 points and 10.1 rebounds per game. He ranks third in the BIG EAST in field goal percentage (.542) and has also recorded 31 blocked shots (2.06 per game).

THE SERIES:
Miami and Notre Dame face off for the 15th time with the all-time series tied at 7-7. Miami has won three of the last four games against the Fighting Irish.

Miami and Notre Dame last met on February 23, 2002 with Notre Dame taking a 90-77 decision at Miami Arena. Miami is 3-3 against Notre Dame at the Joyce Center including two consecutive victories.

UP NEXT:
Following the Notre Dame game the Hurricanes return home to face Georgetown on January 31 beginning at 7:30 p.m. at the Convocation Center.

Randy Foye had 21 points, eight rebounds and seven assists, and Villanova withstood a late rally to beat the University of Miami, 76-69, at the Convocation Center in Coral Gables, FL.

The Hurricanes trailed by 12 points in second half, but trimmed the lead to 68-65 on Guillermo Diaz’s jumper with 54.2 seconds remaining. Foye then hit a pair of free throws, and Diaz missed a 3-pointer that allowed the Wildcats to hold on.

Foye scored 16 of his 21 points in the second half. Curtis Sumpter, benched to start the game for violating team rules, added 16 points and nine rebounds.

Villanova outrebounded Miami 43-28, an advantage that helped it overcome 23 turnovers.

Robert Hite scored 21 points to pace the Hurricanes, who led 36-35 at halftime but shot just 24.4 percent after the break. Darius Rice added 15 points and nine rebounds.

Chris Thomas matched his career-high with 32 points and added 12 assists to lead Notre Dame to a 90-77 win over the University of Miami at Miami Arena.

Thomas played all 40 minutes and recorded six three-point baskets and six rebounds. Thomas, 10-for-10 from the foul line, made four throws over the final 1:16 to seal the victory.

Notre Dame led 39-34 at halftime and scored 51 points in the second half marking the most allowed by UM this season. The Fighting Irish shot 50 percent from the field in the second-half and outrebounded the Hurricanes 44-31.

David Graves scored 14 of his 18 points in the second half for Notre Dame, while Torrian Jones had 17 points and Ryan Humphrey 15 points.

Darius Rice led Miami with 23 points, 20 in the second half, including six three-pointers. James Jones added 21 points while John Salmons registered 11 rebounds and a career-high 13 assists.

A WIN AGAINST NOTRE DAME WOULD:

TV/RADIO COVERAGE:
Miami’s game versus Notre Dame is not being televised. The game will be broadcast on the Hurricane Radio Network WQAM (560 AM). Joe Zagacki “The Voice of the Hurricanes” will call all the action. Brian London will serve as studio host. Fans can also catch the game on the web at hurricanesports.com.

ON THE COACHES:
University of Miami head coach Perry Clark is in his fourth season with the Hurricanes and 15th season overall as a collegiate head coach. Clark is 64-44 (.593) at Miami while his career record in 14 seasons stands at 249-189 (.568).

CLARK GOES FOR NO. 250:
Miami head coach Perry Clark will be going for career win No. 250 when the Hurricanes’ face Villanova on Sunday, January 25. Clark recorded his 249th win in Miami’s 73-63 victory over Rutgers on January 21. Clark won 185 games in 11 seasons at Tulane (1989-00) and has 64 wins in his fourth season at Miami. With his next win Clark would move into 68th in victories among active coaches.

PLAYING ABOVE THE RIM:
The Hurricanes have recorded 71 dunks (3.74 per game) already this season. Miami registered only 50 dunks all of last season. At this current pace the Hurricanes would record 116 dunks which would easily be the team’s highest total over the last 10 seasons. Rob Hite leads the Hurricanes in dunks this season with 22.

A MODEL OF EFFICIENCY:
Rob Hite currently ranks 10th in the BIG EAST in scoring at 17.3 ppg but a closer look shows that he is one of the most efficient scorers in the league averaging 1.53 points per shot attempt (328 points/214 field goal attempts). His 1.53 average ranks third among the BIG EAST’s Top-20 scorers (through Jan. 25) behind only Torin Francis (Notre Dame) and Ryan Gomes (Providence).

TOP RECRUITING CLASS:
Head coach Perry Clark and his staff put together one of the nation’s top recruiting classes for this upcoming season. Miami’s class of forward Karron Clarke, guard Guillermo Diaz, guard Anthony Harris and forward/center Anthony King is ranked as high as eighth in the nation by Street & Smith’s.

BIG EAST SINGLE GAME TICKETS ON SALE:
Single-game tickets for all University of Miami men’s basketball BIG EAST conference home games, are on sale. Fans can order single-game tickets by phone by calling 305-284-CANE, or log on to www.hurricanesports.com.