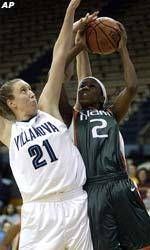 VILLANOVA, Pa. (AP) – Liad Suez scored 26 points and made the winning shotwith 25 seconds remaining to give Villanova a 58-55 victory Wednesday nightover No. 24 Miami.

A free throw by James tied the game at 51-51 with 3:40 remaining. Suezresponded with a layup, but Miami’s Shaquana Wilkins tied the game.

Suez scored again to put the Wildcats ahead 55-53, but James hit a 15-footjumper to force another tie. Then Suez put Villanova ahead to stay with abaseline layup.

Miami had the early advantage after Villanova scored the first five pointsof the game. The Hurricanes went on a 15-2 run and led by as many as 10 pointsin the first half.

The Wildcats rallied to tie the game at 29-29 at the break, with Mix scoringwith one second left on the clock.

The second half was tight with four ties and four lead changes in the final10 minutes. Neither team led by more than three points after the break.