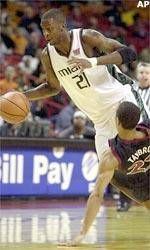 MIAMI (AP) – Darius Rice scored 25 points to lead Miami to a 72-66 victoryagainst Temple on Saturday in the Orange Bowl Classic.

Rice made a season-high five 3-pointers and added five rebounds and threeassists. His final assist led to Gary Hamilton’s layup that helped seal thegame with about a minute to play.

Hamilton’s bucket made it 68-64, then Eric Wilkins got a steal and hit afree throw to push the lead to five with 44 seconds remaining.

Temple led 22-14 late in the first half before Rice sparked a 13-4 run forMiami. He hit two 3-pointers to held the Hurricanes cut the lead to 30-29 atthe break.

Rice finished 5-of-9 from beyond the arc and 9-of-16 from the floor. RobertHite added 15 points, and Guillermo Diaz chipped in 10 off the bench. Diazscored twice on acrobatic up-and-under moves, plus on an alley-oop.

David Hawkins led the Owls with 28 points on 8-of-20 shooting and had sevenrebounds. But he went 1-of-6 from the 3-point line, adding to Temple’s woesfrom long range. The Owls finished 5-of-23 from beyond the arc.

Temple was relegated to long-range jumpers after losing 7-foot-1 centerKeith Butler to a face injury midway through the first half. Butler, whoentered the game averaging 8.3 points and 6.8 rebounds, did not return.

The Hurricanes played a second consecutive game without forward Will Frisby.The team is waiting to see if he committed an undisclosed NCAA infraction.