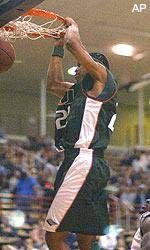 ON FLORIDA STATE:
Florida State enters its match-up with Miami with a record of 7-0 following an 83-46 win over Fairleigh Dickinson on December 6th. The Seminoles are off to their best start since opening 8-0 in 1988-89.

Florida State has been led this season by senior guard Tim Pickett who is averaging a team-high 16.1 points and 2.4 steals per game. Pickett has connected on 40-84 (.476) from the field this season including a blistering 24-50 (.480) from three-point range.

The Seminoles other double-figure scorer this season is junior forward Anthony Richardson who is averaging 12.7 points and a team-high 5.3 rebounds per game.

As a team the Seminoles are shooting 50.1 percent (195-389) from the field while holding their opponents to just 34.9 percent (130-373) shooting. Florida State opponents are averaging just 53.6 points per game this season.

THE SERIES:
Miami and Florida State meet for the 52nd time. The Seminoles lead the all-time series 27-24 including a 72-55 win last season in Tallahassee.

Miami and Florida State first met on January 19, 1951 with the Hurricanes taking an 80-61 decision in Miami. The Hurricanes are 21-7 all-time at home versus the Seminoles.

UP NEXT:
Up next for the Hurricanes is a battle with perennial Temple on December 20 at the Orange Bowl Basketball Classic at AmericanAirlines Arena. Tip-off is scheduled for 6 p.m. Miami and Temple will be facing off for the just the second time in basketball. The only other meeting took place during the 1961-62 season.

LAST GAME:
MIAMI 61, UMBC 52
December 9, 2003
Convocation Center, Coral Gables, FL
Robert Hite scored 13 of his 18 points during a late second-half rally to lead Miami to a 61-52 win over UMBC in the Convocation Center.

Down 23-21 at the half, Miami used a 13-2 run to take control of the game. William Frisby’s dunk with just over six minutes left gave Miami a 45-43 lead, its first since leading 4-2 in the first half.

Hite, who was 5-of-6 shooting in the second half, tied the game with a three-point play, then capped Miami’s run with a layup to give the Hurricanes a 47-43 lead. Darius Rice scored 12 points, and Frisby chipped in 10 for Miami.

The win was Miami’s 24th consecutive home victory against a non-conference opponent. The Hurricanes improve to 5-0 at home this season.

Pickett shot 4-of-15 from the field, including 4-of-10 from behind the three- point line, while Anthony Richardson chipped in with 14 points and Todd Galloway 11 in the victory for the Seminoles.

Miami, which had won three straight to start the year, has now lost two in a row after falling to Florida Atlantic in its previous game.

James Jones scored 14 points and pulled down 10 rebounds for his second double-double of the season. Darius Rice added 11 for the Hurricanes, who shot just 28.3 percent from the field in the game and 21.7 percent from three-point range.

The Hurricanes scored the first points of the game, but from there on out it was all Florida State as it took advantage of a 12-1 run thereafter and cruise to a 39-28 edge at the break.

In the second half the Seminoles maintained their double-digit lead throughout, eventually claiming the 17-point win.

Miami shot just 5-of-23 from three-point range, compared to 9-of-19 for Florida State.

A WIN AGAINST FSU WOULD:

The game will be broadcast on the Hurricane Radio Network WQAM (560 AM). Joe Zagacki “The Voice of the Hurricanes” will handle the play-by-play with Josh Darrow adding analysis. Brian London will serve as studio host.

The game will also be broadcast in Spanish on Radio Unica (1210 AM). Fans can also catch the game on the web at hurricanesports.com.

ON THE COACHES:
University of Miami head coach Perry Clark is in his fourth season with the Hurricanes and 15th season overall as a collegiate head coach. Clark is 56-40 (.583) at Miami while his career record in 14 seasons stands at 241-185 (.566).

VERSUS THE ACC:
Miami holds a 34-51 (.400) record against Atlantic Coast Conference teams. The Florida State game will be the first of two against ACC competition this season for Miami. The Hurricanes will take on North Carolina on January 7th.

The six Miami-area organizations who picked up dinners were: Children & Families, Ronald McDonald House, Gladstone Center, Florida Baptist Home, Universal Truth Center, and Child Hope. The full dinners were donated by Sysco Food Services of South Florida. This Thanksgiving marked the eighth consecutive year that University of Miami Athletic Department and its student-athletes have reached out to the community during the holidays.