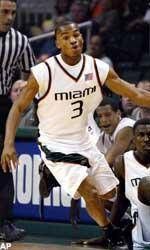 ON STETSON:
Stetson enters its match-up with Miami with a 2-0 record following a 74-60 win over Puerto-Rico Mayaguez on November 24. Stetson opened the season with a 78-56 win over Flagler.

The Hatters have been led this season by sophomore guard E.J. Gordon who leads the team in both scoring (16.5 ppg) and rebounding (8.5 rpg).

THE SERIES:
Miami and Stetson meet for the 74th time, and for the first time since 1971. Miami, which has faced Stetson more than any other opponent, leads the all-time series 40-33. The series began on January 20, 1928 with the Hurricanes winning 33-25 in Coral Gables. Stetson currently holds a five game winning streak over the Hurricanes including a 91-76 win in the last meeting between the two schools on February 8, 1971.

UP NEXT:
Up next for the Hurricanes is a crosstown battle with Florida International on Saturday, December 6 beginning at 7:30 p.m. at the Convocation Center.

TV/RADIO COVERAGE:
Miami’s game versus Stetson will not be televised. The game will be broadcast on the Hurricane Radio Network WQAM (560 AM). Joe Zagacki “The Voice of the Hurricanes” will handle the play-by-play. Brian London will serve as studio host. The game will also be broadcast on the University of Miami student radio network WVUM (90.5 FM). Fans can also catch the game on the web at hurricanesports.com.

A WIN AGAINST STETSON WOULD:

LAST GAME: BRADLEY 83, MIAMI 82
James Gillingham’s two free throws with 16.3 seconds remaining lifted Bradley to a 83-82 come-from-behind victory over Miami in the final day of the Las Vegas Tournament. Gillingham connected on 16-of-18 from the line and had a game-high 29 points. Bradley was 30-38 from the line for the game while Miami finished 16-23.

Bradley trailed 71-61 with less than eight minutes to play, but rallied back thanks to the hot shooting of Gillingham and Phillip Gilbert. Gilbert also finished with 29 points, including 11-of-19 from the field. Miami had a chance to win at the buzzer, but Robert Hite’s 10-footer rimmed in and out. Gillingham scored nine points in the final two minutes of the first half, including 6-of-6 from the foul line, as the Braves went on a13-6 run to enter halftime with a five-point lead, 44-39.

Miami scored 18 points in the opening four minutes of the second half to take what appeared to be a comfortable lead. Darius Rice made a pair of 3-pointers to key the outburst. Rice led the Hurricanes with 18 points, 16 in the second half, and Hite finished with 17.ty of Miami (2-2)

MEN’S-WOMEN’S DOUBLEHEADER:
Miami’s men’s basketball game versus Stetson will be the second game of a men’s-women’s doubleheader at the Convocation Center. The UM women’s team will face Florida International at 5 p.m. followed by the men at 8:00 p.m.

HURRICANES RENEW SERIES WITH STETSON:
Miami’s game versus Stetson will mark its first game against its once bitter rival since the 1971 season. Miami has faced the Hatters 73 times, more than any other opponent, in a series that dates back to 1928. Before Miami dropped its basketball program following the 1970-71 season, the Hurricanes and the Hatters had played every season since 1947.

The Naismith Awards program, now in its 36th year, honors the outstanding college basketball players in the United States. The awards program was founded by the Atlanta Tipoff Club, an organization dedicated to recognizing the achievements of student-athletes in basketball.The candidates were selected by a vote of the Board of Selectors comprised of leading basketball coaches, journalists and basketball analysts. Members of the board were asked to name top male and female players who are most likely to be in contention for the award.

Only Stanford (100%) and Southern Methodist (83%) had higher graduation rates among Division I-A institutions. The national average for Division I-A men’s basketball players over that four-year period was 36 percent.In addition the Hurricanes ranked in a tie for 19th among all 327 Division I institutions.