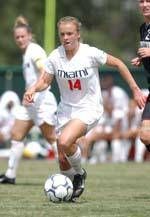 CORAL GABLES, Fla.-Sophomore forward Lindsey Yach (Carrollton, Texas) was named BIG EAST Offensive Player of the Week for the second time this season after leading the Miami soccer team to a win over Syracuse this weekend.

Yach had the game-winning goal on a penalty kick and assisted on Miami’s other score in the 2-1 win over Syracuse.

The win over the Orangewomen moved Miami into a first-place tie with No. 15 UConn and St. John’s in the Northeast Division.

Yach tallied three points in the win over Syracuse to give her 44 total points in her two-year career. She is fourth on Miami’s all-time career list with 44 points.

She is Miami’s leading goal scorer this season with nine goals on the year.

Miami is back in action Friday as they travel to face BC in Chestnut Hill, Mass.