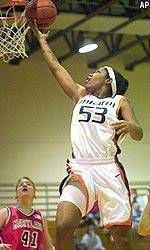 CORAL GABLES, Fla.-The Miami women’s basketball team officially kicked off the start of the 2003-2004 season with a three-hour practice Saturday morning in the Knight Sports Complex.

“I was really pleased with the overall effort of our team today,” said head coach Ferne Labati, entering her 16th season at the helm of the program. “Our kids worked really hard in the off season and it showed out here today.”

Miami returns four starters from last seasons 18-13 squad which advanced to the BIG EAST semifinals and the NCAA tournament.

Coach Labati was impressed with the overall effort of the team on the first day of practice, but was particularly impressed with senior Chanivia Broussard (Miami, Fla.).

“I thought Chanivia (Broussard) did a tremendous job today,” added Labati. “She is in great shape and is working really hard we look for great things from her as a leader this season.”

The Hurricanes welcome three newcomers to the program, Amy Audibert a 6-3 post from Niagara Fall, Canada, Imani Dhahabu a 6-1 forward/center from Vallejo, Calif. and Sandra Jannsson a 5-6 guard from Sodertalide, Sweden.