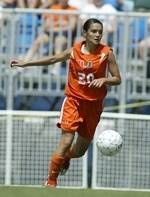 Miami took a 1-0 halftime lead after Ta found a ball in traffic and beat ECU goalie Lindsi Troxler from six yards out in the 22nd minute. The goal was Ta’s the second of the season.

The Lady Pirates rallied in the second half to take a 2-1 lead. Sophomore Melissa Penny put ECU on the board in the 61st minute scoring on a free kick from 30-yards out. Meghan McCallion then gave ECU the lead five minutes later scoring off a rebound in the 66th minute.

In the 84th minute the Hurricanes tied the score when Sanguinetti headed in a perfectly served ball from freshman Caitlin Oyler (Pacific Palisades, CA). Both teams went scoreless during 20 minutes of overtime to finish in a tie.

The Hurricanes return to action on Sunday, October 19 when they face BIG EAST rival Syracuse at noon at Cobb Stadium in Coral Gables.