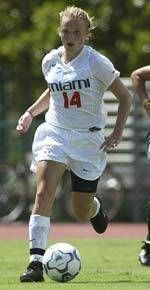 Soccer Falls To FAU In Overtime

Miami outshot FAU 29 to six, including 15 shots on goal but only connected once.

“We scored a great goal and did exactly what we wanted to do offensively, but we just didn’t finish,” said head coach Tricia Taliaferro.

Sophomore Lindsey Yach (Carrollton, Texas) scored her second goal of the season as she connected on a pass from junior Britney Butcher (Bothell, Wash.) 56 minutes into the match.

The duo has combined to score two of Miami’s four total goals so far this season.

Miami tallied seven corner kicks while FAU had one on the night.

The Hurricanes are back in action Friday traveling to face UCF at 8 p.m.