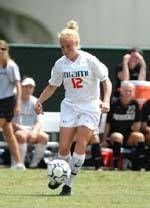 “I thought we played well overall, Indiana was a really good team as far as being organized and took some dangerous chances which forced us to make some adjustments and I thought the players adjusted well,” said head coach Tricia Taliaferro.

“I am very pleased overall, I thought Britney Butcher contributed allot and we had a couple of freshman come in and contribute, Kristen Champan, Sheuneen Ta and Julie Brooks did well for us, our back line was solid once again.”

The Hurricanes complete the FAU tournament Sunday at 2 p.m. taking on Loyola.