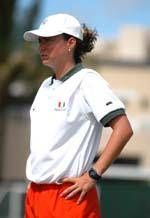 Soccer Prepares For The 2003 Season

In addition to the returning Hurricanes Miami welcomes nine newcomers to the roster for the 2003 season.