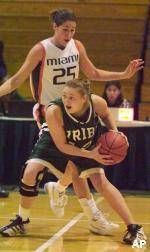 Maryland beat Cleveland State in the first game of the tournament 76-62.

Miami has won four in a row and is a perfect 6-0 at home this season.

The Hurricanes opened the game on an 8-0 run and led for the remainder of the game.Miami owned a 12-point lead (42-30) at halftime. The Hurricanes lost the double-digit lead only once during the second half as the Tribe trailed by nine-points with 5:56 remaining in the game.

UM cruised to a 28-point victory over the Tribe as Saake hit a three-pointer to spark a 15-0 run over the last five minutes of the game.

The Miami/Maryland game will be broadcast live on WVUM (90.5 FM) or via the internet at hurricanesports.com.