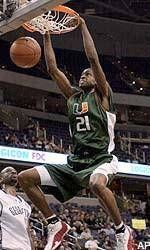 ON HEAD COACH PERRY CLARK:
University of Miami head coach Perry Clark will be entering his third season with the Hurricanes and 14th season overall as a collegiate head coach. Clark is 40-21 (.655) at Miami, including an 24-8 record this season, while his career record in 13 seasons stands at 225-166 (.577).

This year marked the ninth time in his 13 seasons that Clark has guided his team to the postseason (four NCAA, five NIT). This season he guided Miami to a 24-8 record setting a UM single-season record for victories. Miami’s 14 consecutive wins to open the season marked the best start in school history and tied the UM record for consecutive wins.

ONLINE ALL THE TIME:
For the most up to date information on Hurricane Athletics, log on to the official website of the University of Miami Athletic progam – hurricanesports.com.

BALANCED ATTACK:
The University of Miami was arguably one of the most balanced team in the nation offensively last season. All five UM starters averaged in double-figures in scoring. Darius Rice led UM in scoring at 14.9 points per game followed by John Salmons (13.1 ppg), James Jones (12.8 ppg), Marcus Barnes (12.3 ppg) and Elton Tyler (11.9 ppg). Miami joined Davidson, Texas and Valparaiso as the only teams in the NCAA Tournament field that have five players averaging in double-figures.

WHAT’S YOUR 20:
With its 65-56 win over Villanova on February 5 Miami recorded its 20th win of the season. The 20-win season marked the ninth overall for the Hurricanes and third in the last four seasons.

COMEBACK KIDS:
Miami rallied nine times from second-half deficits to win games last season. In Miami’s 102-96 overtime win against Providence on January 19, the Hurricanes came back from a 13-point second half deficit tying the UM record for the largest second-half comeback in a BIG EAST game.

SUCCESS IN THE SUNSHINE STATE:
Entering the 2002-03 season the Hurricanes are the only team in the state of Florida to register a winning record in each of the last eight seasons. The Hurricanes’ 150-89 (.628) mark since the 1994-95 season is the top winning percentage over the last eight seasons while the 150 wins ranks second among the state’s 11 Division I programs.

SALMONS SELECTED IN NBA DRAFT:
University of Miami guard John Salmons (Philadelphia, PA) was selected by the San Antonio Spurs with the 26th pick of the first round at the National Basketball Association Draft held Wednesday evening at Madison Square Garden in New York, NY.

Salmons is the 14th Hurricane in school history to be selected in the NBA Draft and the first since Tim James in 1999. He is the third Hurricane to be chosen in the first round joining Rick Barry, who was selected with the second overall pick by the San Francisco Warriors in 1965, and James who was a first round selection in 1999 by the Miami Heat (25th pick overall).

Included in his four seasons were three NCAA Tournament appearances, one NIT appearance, the 1999-00 BIG EAST regular-season title and the school’s first NCAA Sweet 16 appearance in 2000.