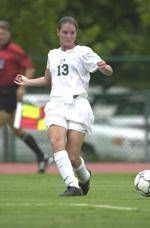 Lisa Gomez Is A Member Of The Mexican National Team

Check out the feature article on Lisa Gomez at palmbeachpost.com .

CORAL GABLES, Fla.-Lisa Gomez (Boca Raton, Fla.) of the University of Miami soccer team is a current member of the Mexican National Team.

Gomez, who has dual citizenship, played alongside defenders Gina Eagleson and Monica Gonzalez. Eagleson captained Mexico at the 1999 Women’s World Cup, while Gonzalez was named an NSCAA Second-Team All-American after starting for Notre Dame as a senior this past fall.

Gomez, played the entire match against the United States broadcasted live on ESPN 2 on Jan. 12 at Blackbaud Stadium in Charleston, S.C.

The Mexicans fell 7-0 to the defending World Cup Champions.

She defended Shannon McMillian who scored three of the Americans’ goals on the night.

Gomez, a junior defender, was named to the National Soccer Coaches Association of America All-South Third Team after leading the Hurricanes to their first-ever NCAA Tournament appearance.

She finished the season with four goals, three assists and 11 points. She scored the game-winning goal in Miami’s 3-0 shutout victory over Florida Atlantic (Sept. 4, 2001).