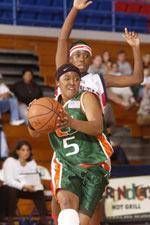 Fowler was team captain and played in all 31 games this season.

James ranks second on Miami’s All-Time Career list with 134 three-pointers in her career.