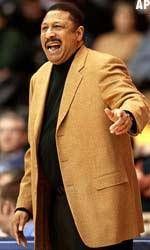 ON HEAD COACH PERRY CLARK:
University of Miami head coach Perry Clark will be entering his third season with the Hurricanes and 14th season overall as a collegiate head coach. Clark is 40-21 (.655) at Miami, including an 24-8 record this season, while his career record in 13 seasons stands at 225-166 (.577).

This year marked the ninth time in his 13 seasons that Clark has guided his team to the postseason (four NCAA, five NIT). This season he guided Miami to a 24-8 record setting a UM single-season record for victories. Miami’s 14 consecutive wins to open the season marked the best start in school history and tied the UM record for consecutive wins.

ONLINE ALL THE TIME:
For the most up to date information on Hurricane Athletics, log on to the official website of the University of Miami Athletic progam – hurricanesports.com.

COMEBACK KIDS:
Miami rallied nine times from second-half deficits to win games last season. In Miami’s 102-96 overtime win against Providence on January 19, the Hurricanes came back from a 13-point second half deficit tying the UM record for the largest second-half comeback in a BIG EAST game.

WHAT’S YOUR 20:
With its 65-56 win over Villanova on February 5 Miami recorded its 20th win of the season. The 20-win season is the ninth overall for the Hurricanes and third in the last four seasons.

BALANCED ATTACK:
The University of Miami was arguably one of the most balanced team in the nation offensively. All five UM starters averaged in double-figures in scoring. Darius Rice led UM in scoring at 14.9 points per game followed by John Salmons (13.1 ppg), James Jones (12.8 ppg), Marcus Barnes (12.3 ppg) and Elton Tyler (11.9 ppg). Miami joined Davidson, Texas and Valparaiso as the only teams in the NCAA Tournament field that have five players averaging in double-figures.

SALMONS THE ONE AND ONLY:
With his 15 points and 10 assists against Charlotte on December 22, John Salmons became the first Hurricane to record 1000 points, 600 rebounds, 300 assists and 150 steals during his career. Salmons ends his career with 1287 points, 687 rebounds, 433 assists and 192 steals. Salmons ranks 13th on UM’s career scoring list, third in assists and third in steals.

SENIOR SUCCESS:
Miami seniors John Salmons, Jerry Schlie and Elton Tyler have been a part of the most successful stretch in UM basketball history.

Tyler and Schlie, both redshirt seniors, have been a part of teams that have gone 104-49 (.680), made five straight post-season appearances, including four NCAA tournament berths, won the BIG EAST regular-season title in 1999-00, and reached the Sweet Sixteen of the NCAA Championships for the first time school-history in 2000.

In the four seasons in which Tyler has competed, he redshirted the 2000-01 season, the Hurricanes have registered an 88-36 (.715) record. With this season’s NCAA tournament berth Tyler became the first player in UM history to compete in four NCAA Championships.

Salmons, a four-year starter, helped lead Miami to an 86-39 (.688) record marking the most wins in a four-year period in UM history. Included in those four seasons is four post-season appearances, including three NCAA Tournament berths, the 1999-00 BIG EAST Regular Season title and a trip to the Sweet 16 in the 2000 NCAA Championships.

LOGGING MAJOR MINUTES:
Senior John Salmons, a four-year starter for the Hurricanes, has played more minutes than any other player in UM history. Salmons played 1,077 minutes this season improving his career total to 3,814. Salmons’ career total surpasses the old record of 3,761 minutes set by Eric Brown from 1985 to 1989.

SUCCESS IN THE SUNSHINE STATE:
Entering the 2002-03 season the Hurricanes are the only team in the state of Florida to register a winning record in each of the last eight seasons. The Hurricanes’ 150-89 (.628) mark since the 1994-95 season is the top winning percentage over the last eight seasons while the 150 wins ranks second among the state’s 11 Division I programs.

Below is a list of UM’s overtime games since 1990: