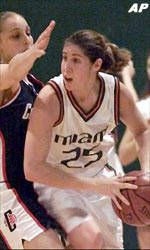 PISCATAWAY, N.J. —– The Villanova women’s basketball team defeated the Miami Hurricanes, 68-49, in the quarterfinals of the 2002 Big East Tournament held on the campus of Rutgers University at Louis Brown Athletic Center.

With the victory, the Wildcats advance to the semifinals where they will face the top-seeded and No. 1 ranked, Connecticut Huskies.

Miami came out and scored the first six points of the second half to take a 35-30 lead with 17:50 remaining, but the Wildcats refused to let the game slip away and responded with a 34-8 run over the next 13:02.

The Wildcats cruised to the 68-49 victory despite only scoring four points in the final 4:48 of the game.

The Hurricanes end the season with an 18-11 record.