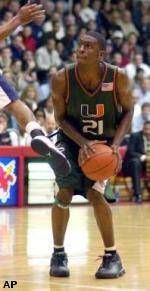 Rice, a second-team NABC All-District selection last season, isaveraging a team-high 15.3 points and 6.2 rebounds per game. He has recorded10 games of 20-or-more points this season, and has connected on a team-high69 three-point baskets. He joins Johnny Hemsley (2000), Tim James (1998 and1999), Tito Horford (1988) and Rick Barry (1965) as the only Hurricanes toearn first-team honors.

The selections of Rice and Salmons marks the fifth consecutiveseason the Hurricanes have had at least one All-District selection.