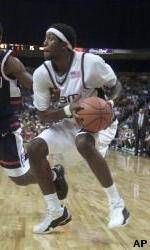 “This kind of sets the tone for the postseason,” Thomas said. “We showed the selection committee what we are capable of.”

The victory snapped a three-game losing streak to the Hurricanes, who have lost four of seven.

“This is probably the most disappointing game of the year,” Miami coach Perry Clark said. “We just did not do a good job in the second half. Thomas really controlled the game.”

Notre Dame led 39-34 at halftime and scored 51 points in the second half. The Fighting Irish shot 50 percent from the field in the final 20 minutes, and finished 20-for-25 from the foul line.

“I thought tonight was a game where if you won it, it was a great deposit in the postseason bank,” Notre Dame coach Mike Brey said. “If you lost, it wasn’t the end of the world.”

David Graves scored 14 of his 18 points in the second half for the Fighting Irish, while Torrian Jones had 17 points and Ryan Humphrey 15.

“We had balance on the offensive and defensive ends,” said Thomas, who also scored 32 points against Rutgers on Feb. 6. “This probably was my best game because it came against the biggest team we’ve played.”

“We need to get our swagger back,” Jones said. “We definitely need a win now.”

The Fighting Irish finished with a 44-31 rebound advantage and were 10-for-23 from 3-point range.

The Hurricanes dropped into a second-place tie with St. John’s in the Big East’s East Division. But the Red Storm have a better division record, meaning Miami is third in terms of seeding for the Big East tournament.

Marcus Barnes had 13 points for the Hurricanes, but John Salmons, Miami’s second leading scorer, had a season-low three points. The senior guard had a career-high 13 assists and 11 rebounds, but had scored in double-figures the previous five straight games.

Notre Dame led 39-34 at halftime, but consecutive 3-pointers by Rice to start the second half gave Miami a 40-39 lead.

The lead changed four times early in the second half before Graves’ 3-pointer put Notre Dame ahead for good, 44-42.

Humphrey scored 13 points on 6-for-9 shooting in the first half.

Thomas’ 20 points in the second half set the tempo the rest of the game.

“(Thomas) is probably the most talented kid I’ve ever played with,” Torrian Jones said. “There is no end to what he can do.”