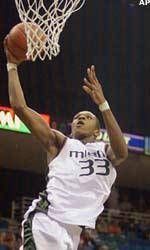 Tyler was 10-of-13 from the field, while Salmons had a career-high 11assists and six rebounds for the Hurricanes (21-4, 8-4 Big East), who pulledwithin one-half game of Connecticut for first place in the conference’s EastDivision.

Marcus Barnes had 13 points for Miami, while James Jones finished with 12.

Donald Emanuel led St. John’s with 10 points. Hatten, who entered the gameaveraging 22.4 points per game in the conference, was held to eight points on2-for-12 shooting.

For the game, St. John’s shot 30 percent from the field.

The blowout was uncharacteristic of the series. In 14 of the last 16 gamesbetween the schools, the score was decided by less than five points or inovertime. St. John’s beat Miami 71-60 on Jan. 8.

Consecutive 3-pointers by Barnes to close the first half gave Miami its22-point lead. The 14 points was the Red Storm’s first-half low for the seasonas they were 4-for-27 from the field and committed 11 turnovers.