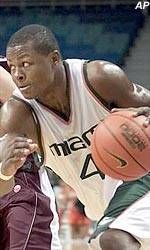 Marcus Barnes had 13 of his 16 points in the first half for Miami (20-4,7-4), which fell out of a first-place tie with Connecticut in the EastDivision. The loss was the Hurricanes’ second in eight games.

John Salmons had 16 points for Miami and Darius Rice added 15.

The smaller Eagles relied on strong rebounding from the start, owning a 18-7advantage in taking a 32-15 lead 15 minutes in the game. Miami closed the halfwith an 8-2 run.

The Eagles outrebounded Miami 41-27 for the game.

Both teams had scoring runs over the game’s first 61/2 minutes. BC went on a10-0 spurt before the Hurricanes scored 12 straight points. Sidney then hadeight points and Bell added five in a 15-0 run that made it 32-15.

The Eagles, who led 34-23 at halftime, scored the first seven points of thesecond half – all by Bell – to open their biggest lead of the game.

BC saw its lead sliced to 56-47 on Rice’s two free throws with 7:27 to go.But Bell answered with a 3-pointer from the top of the key and Miami never gotcloser than eight points the rest of the way.

When these schools met in Boston during the football season, Boston Collegenearly upset the eventual national champions before a fluke bounce in theclosing seconds led to an interception and 80-yard TD return by Ed Reed,clinching an 18-7 win for the Hurricanes.