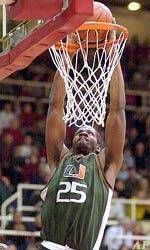 ON THE HUSKIES:
Connecticut enters the Miami game with a record of 14-4, 6-1 in the BIG EAST, following a 61-53 loss at Rutgers on January 30. The loss snapped the Huskies’ six game winning streak.

Connecticut, ranked 17th by the Associated Press and 22nd in the USA Today/ESPN poll, has been led this season by All-American Caron Butler. Butler leads the team in scoring (18.9 ppg) and steals (2.3 spg), and ranks second in rebounding (6.5 rpg) and assists (3.0 apg).

Okafor, who has been named BIG EAST Rookie of the Week three times this season, is averaging 8.3 points and a team-best 9.5 rebounds per game. He also leads the BIG EAST and ranks sixth in the nation in blocked shots (4.0 bpg).

Selvie was fouled as he tried to put back a Tony Robertson miss. It was a redemption for Selvie who, a minute earlier, threw away a pass with 1:04 left. The turnover led to a Darius Rice 3-pointer that put the Hurricanes up 75-74 with 36.5 seconds left.

Miami had one more chance to score as John Salmons took the inbounds pass, drove the lane and put up a shot that missed wide.

The Huskies trailed 43-38 at the break but worked their way back by dominating the post and getting most of their starters back after a foul-filled first half.

The Huskies outrebounded the Hurricanes 41-28 and outscored Miami 40-26 in the paint. Selvie finished with 12 points and had a team-high eight boards.

The Hurricanes rallied back from three 10-point deficits in the second half.

A WIN AGAINST CONNECTICUT WOULD:

TV/RADIO COVERAGE:
The Connecticut game is being produced by ESPN Regional Television and is being broadcast live in Miami on Fox Sports Net Florida in Miami. Don Criqui will handle the play-by-play duties with Bucky Waters adding analysis.

ON THE COACHES:
University of Miami head coach Perry Clark is in his second season with the Hurricanes and 13th season overall as a collegiate head coach. Clark is 34-16 (.680) at Miami, including an 18-3 start this season, while his career record in 13 seasons stands at 219-161 (.576). Last season Clark led the Hurricanes to a berth in the National Invitation Tournament marking the eighth time in 12 seasons he has guided his team to post season play. Connecticut head coach Jim Calhoun is in his 16th year with the Huskies and 30th season overall. His record at UConn is 363-146 (.713) while his overall record is 613-282 (.685).

UP NEXT:
Following the Connecticut game the Hurricanes hit the road to take on Villanova, February 5 at 7:30 p.m. Miami defeated Villanova 76-58 earlier this season and have won five straight against the Wildcats.

Rice recorded his first double-double of the season with 30 points and 10 rebounds in a 76-58 win over the Wildcats last Thursday. He was 10-15 from the field, including 4-6 from three-point range, and 6-9 from the line.

Rice, who scored 32 in a win over Providence on January 19, is the first player since Eric Brown in 1989 to record back-to-back games of 30 or more points. Rice currently leads the team in scoring at 15.2 points per game.

COMEBACK KIDS:
In Miami’s 102-96 overtime win against Providence on January 19, the Hurricanes came back from a 13-point second half deficit tying the UM record for the largest second-half comeback in a BIG EAST game. Miami also came from 13 points down in the second half to defeat Georgetown on January 18, 1997. The game also marked the second straight in which Miami overcame a double-figure second-half deficit to win. Miami was down 11 in the second-half to Pittsburgh before rallying for a 76-69 double-overtime win. Overall the Hurricanes have rallied six times from second-half deficits to win games.

BALANCED ATTACK:
The University of Miami is arguably one of the most balanced team in the nation offensively. All five UM starters are averaging in double-figures in scoring. Darius Rice leads UM in scoring at 15.2 points per game followed by John Salmons (13.7 ppg), James Jones (13.6 ppg), Marcus Barnes (11.5 ppg) and Elton Tyler (10.8 ppg). Miami joins Arizona as the only teams ranked among the AP or ESPN/USA Today polls that have all five starters averaging in double-figures.

The Naismith Awards program, now in its 34th year, honors the outstanding college basketball player in the UnitedStates.