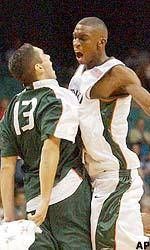 MIAMI (AP) – Darius Rice’s summer workouts meant to make him a complete player are starting to pay off.

Rice had 30 points and 10 rebounds as No. 22 Miami beat Villanova 76-58 Thursday night, extending the Hurricanes’ winning streak to four games and improving their home record to 12-0.

Rice, the first Hurricane to have consecutive 30-point games since Eric Brown in 1989, was 10-of-15 from the field and had four 3-pointers.

“In the summer I worked on all aspects of my game,” said Rice, who hit his first six shots of the game.

Villanova, which has lost four of five, shot 34 percent, including 4-fof-23 from 3-point range, and turned the ball over 26 times.

“I’m obviously very impressed with their basketball team,” Wildcats coach Jay Wright said of Miami. “They were very prepared to play us. We didn’t quit. I can’t say anything else good about our team.”

After winning two straight games in overtime, the Hurricanes wanted an impressive performance.

“We wanted to make a statement because people were saying we couldn’t sustain our level of play,” Salmons said. “This program never gets the respect it deserves.”

Gary Buchanan led Villanova with 15 points, but he was 5-for-18 from the field, including 3-for-12 from behind the arc. Derrick Snowden had 12 points, while Sales had 10 points and 12 rebounds before fouling out in the final minute.

It was the second straight game Rice had 20 points in the first half. On Saturday, he finished with 32 points on 13-of-17 shooting in a 102-96 overtime win over Providence.

The Hurricanes got off to their best start of the season, taking a 12-0 lead. Rice hit his first six shots, including three 3-pointers, and had 15 points in the opening eight minutes.

“That’s about as good as we’ve seen,” Clark said of the quick start.

Miami used a 15-0 run to go ahead 27-3 on Elton Tyler’s jumper. The Wildcats turned the ball over 16 times in the first half and started off shooting 1-of-13. In one stretch, they went 6:16 without a field goal.