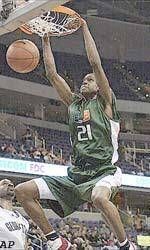 ON THE FRIARS:
Providence enters its game with Miami with a record of 10-8, 1-3 in the BIG EAST following a 69-62 loss to Connecticut on Wednesday in Providence. The Friars struggled against the Huskies shooting just 29.4 percent (20-68) from the field and were outscored 34-14 in the paint. Providence is shooting 40.3 percent (428-1063) from the field this season.

The Friars have been led this season by the backcourt of Abdul Mills and John Linehan. Mills is averaging a team-high 14.9 points per game while Linehan, the only senior in the starting line-up, averages 11.2 points to go with 4.2 assists and 3.9 steals per game.

LAST TIME VERSUS PROVIDENCE: Romuald Augustin and Erron Maxey scored 13 points apiece while Karim Shabazz recorded a double-double with 11 points and 12 rebounds as Providence College defeated the University of Miami, 80-70, at the Miami Arena.

Miami guard Marcus Barnes came off the bench to lead the Hurricanes with 20 points. James Jones added 14 points and a team-high eight rebounds for Miami.

The Hurricanes committed 21 turnovers, the most since the season opener against Florida Atlantic, and were outrebounded 43-32 including 24-10 in the second half.

TV/RADIO COVERAGE:
The Providence game is being produced by ESPN Regional Television and is being broadcast live in Miami on WBFS-TV (UPN) in Miami. Don Criqui will handle the play-by-play duties with Bob Wenzel adding analysis.

A WIN AGAINST PROVIDENCE WOULD:

ON THE COACHES: University of Miami head coach Perry Clark is in his second season with the Hurricanes and 13th season overall as a collegiate head coach. Clark is 32-15 (.681) at Miami, including an 16-2 start this season, while his career record in 13 seasons stands at 217-160 (.576). Last season Clark led the Hurricanes to a berth in the National Invitation Tournament marking the eighth time in 12 seasons he has guided his team to post season play.

UM TIES WIN STREAK RECORD:
Miami’s 14-0 start marked the best in school-history and tied the school-record for the most consecutive victories set in 1947.

HURRICANES WIN 11TH STRAIGHT AT HOME: With its double-overtime win over Pittsburgh, the Hurricanes recorded its 11th consecutive win at home marking the longest home win streak since UM won 15 straight at home bridging the 1964-65 and 1965-66 seasons.

NO DAY AT THE BEACH:

Miami’s 77-74 win over No. 15 Connecticut on January 20 marked the seventh consecutive season that the Hurricanes have defeated a ranked opponent in the Miami Arena. Miami is 2-0 this season against ranked teams at Miami Arena having also defeated No. 22 Seton Hall, 72-66, on Feb. 1.