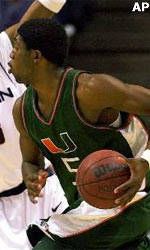 ON THE HOKIES: Virginia Tech enters the Miami game with a record of 6-9, 0-3 in the BIG EAST, following a 95-60 loss at Connecticut on Thursday, January 10. The loss marked the fourth straight for the Hokies who last recorded a victory on December 15 against Radford (63-56).

Virginia Tech has been led this season by the back court of junior Brian Chase and Carlos Dixon. Dixon leads the team in scoring with a 12.7 points per game average while Chase ranks second on the team at 11.5 points per game. Chase has been on fire from long range having connected on 40-of-85 (.471) from beyond the arc.

THE SERIES: Miami and Virginia Tech are meeting for just the third time in basketball. The Hokies and Hurricanes split the season series last season with each team winning on its home floor. Virginia Tech defeated Miami, 85-74, in Blacksburg, VA while the Hurricanes took an 86-61 decision in Miami.

TV/RADIO COVERAGE: The Virginia Tech game is being produced by ESPN Regional Television and is being broadcast live in Miami on Fox Sports Net Florida. Jay Randolph will handle the play-by-play duties with Tom Penders adding analysis.

James Jones and Darius Rice each scored 16 points as the University of Miami avenged an earlier season defeat by knocking off Virginia Tech 86-61 at the Miami Arena.

The Hokies shot 33 percent, compared to Miami’s 48 percent and the Hurricanes had a season-low nine turnovers.

Micheal Simmons had a 3-pointer and two assists in a 10-0 run that gave Miami a 27-20 lead. Matthews scored the next five points of a 6-0 rally that brought the Hokies within one.

The Hurricanes answered with another 10-0 burst to end the half with a 37-26 lead. Jones hit two free throws and then slammed home a tap-in dunk to cap the run.

ON THE COACHES: University of Miami head coach Perry Clark is in his second season with the Hurricanes and 13th season overall as a collegiate head coach. Clark is 30-15 (.667) at Miami, including an 14-2 start this season, while his career record in 13 seasons stands at 215-160 (.573). Last season Clark led the Hurricanes to a berth in the National Invitation Tournament marking the eighth time in 12 seasons he has guided his team to post season play.

Virginia Tech head coach Ricky Stokes is in his third season as a collegiate head coach, all with the Hokies. His record stands at 30-43 (.411) including a 6-9 record this season.

UM TIES WIN STREAK RECORD: Miami’s 14-0 start marked the best in school-history and tied the school-record for the most consecutive victories set in 1947.

MIAMI GOES PERFECT OUT OF CONFERENCE: With its 71-48 win over St. Francis (PA) on December 30, the University of Miami completed its non-conference schedule with a perfect 13-0 record marking the first time in school-history the Hurricanes have gone undefeated in non-conference play.

MIAMI vs. NON-CONFERENCE OPPONENTS: Since becoming the 10th member of The BIG EAST Conference beginning with the 1991-92 season, the Hurricanes have compiled a 74-35 (.679) record against non-conference opponents, including a 50-13 mark (.794) at the Miami Arena.

TALKING RPI: As of January 6 the Hurricanes were No. 24 in the RPI rankings according to CollegeRPI.com. Miami’s ranking is the third highest among BIG EAST schools.

MIAMI IN THE 2001-02 POLLS: The Miami Hurricanes moved up to No. 21 in both the Associated Press and ESPN/USA Today Top 25 College Basketball polls.

NO DAY AT THE BEACH: Miami’s 77-74 win over No. 15 Connecticut on January 20 marked the seventh consecutive season that the Hurricanes have defeated a ranked opponent in the Miami Arena. Miami is 2-0 this season against ranked teams at Miami Arena having also defeated No. 22 Seton Hall, 72-66, on Feb. 1.

MIAMI WINS PARADISE JAM TOURNAMENT: Miami’s victory over Clemson in the championship game of the Virgin Islands Paradise Jam marked UM’s first tournament title since the 1988 season when the Hurricanes took home the title at the Eastern Airlines Palm Beach Classic. That season UM defeated Penn, 102-69, in the opening round, then knocked off Wichita State, 81-59, in the championships game.

LATE SEASON HEAT WAVE: Over the last three seasons Miami has played well in the month of February registering a 20-3 (.870) record.

RICE FOR NAISMITH: University of Miami sophomore Darius Rice (Jackson, MS) has been selected as one of 30 preseason candidates for the 2001-02 Naismith College Basketball Player of the Year Award.

MIAMI REACHES POST-SEASON, AGAIN: The Hurricanes have advanced to the post-season in five straight seasons and six times in the last seven years. Miami has gone to the NCAA Tournament in three of the last four seasons including a Sweet Sixteen appearance in 2000.

BIG EAST PICK-AND-ROLL PACKAGES AVAILABLE: The University of Miami will offer a BIG EAST Pick n Roll mini-plan package for the upcoming 2001-02 men’s basketball season. The package is only $80 and includes tickets to any five BIG EAST Conference games of the customer’s choice.

ONLINE ALL THE TIME: Check out the official University of Miami Athletic Department website for up to the minute information on Hurricane Athletics at www.hurricanesports.com.