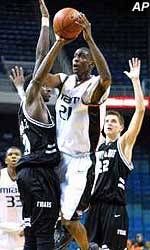 Do your holiday shopping at our online store

With the victory the Hurricanes advance to Tuesday’s championship game against Clemson (2-0) at 7:45 p.m. (ET). The tournament final appearance is Miami’s first since the 1988-89 season when the Hurricanes knocked off Penn and Wichita State en route to the Eastern Airlines Palm Beach Classic.

Ricefinished with 23 points, his second consecutive 20-point game to open the season, and a team-high seven rebounds. Barnes ended with 19 connecting on five of 12 three-point attempts.

After afree throw from Salmons made the score 81-79 with 10 seconds left, the UM defense smothered the Blazers who were unable to get a shot off before the buzzer.