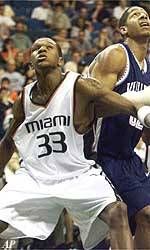 TONIGHT’S OPPONENT:
The University of Alabama-Birmingham enters tonight’s contest with Miami with a record of 1-0 following a 79-66 win over Eastern Michigan in thier opening game of the Virgin Islands Paradise Jam. UAB was led by forward Myron Ransom and guard P.J. Arnold who both poured in 22 points. The Blazers, who were outrebounded (45-29) and outshot (46.4 percent to 43.5 percent) by the Eagles, controlled the game defensively forcing Eastern Michigan into 25 turnovers. UAB scored 30 points off turnovers.

THE SERIES:
Miami and UAB are meeting for the first time.

HURRICANE WARNING FOR THE CARIBBEAN:
Although the Hurricanes are making their first trip to the Virgin Islands it is not the first time UM has ventured to the Caribbean to compete in a basketball tournament. Miami has travelled three time to Puerto Rico including a 1999 visit to the San Juan Shootout. The Hurricanes are 7-3 all-time in tournaments played in the Caribbean.

A WIN TONIGHT WOULD:
***Send Miami to the Paradise Jam Championship game.***Mark the third straight season the Hurricanes have opened the season 2-0.

MIAMI KNOCKS OFF EASTERN MICHIGAN:
Sophomore forward Darius Rice (Jackson, MS) recorded 21 points and nine rebounds to lead the University of Miami men’s basketball team to a 93-56 win over Eastern Michigan in their opening game of the Virgin Islands Paradise Jam in St. Thomas, Virgin Islands. Miami (1-0) will play Alabama-Birmingham (1-0) Monday at 7:45 p.m. (ET) with the winner advancing to Tuesday’s championship game against either LaSalle or Clemson. Rice, one of 30 preseason candidates for the Naismith National Player of the Year Award, scored 12 points in a decisive 24-7 run to open the second half as the Hurricanes extended their 47-29 lead at halftime to 35 points (71-36). Miami starters outscored Eastern Michigan’s 75-44. Junior forward James Jones (Miami American) poured in 17 points despite playing just 18 minutes because of foul trouble. Senior guard John Salmons (Philadelphia, PA) had a strong all-around game posting 15 points, four rebounds, six assists and three steals while sophomore guard Marcus Barnes (Miami Senior) added 13 points and four assists. The Hurricanes out-rebounded the Eagles 46-32 on the night and dominated defensively holding Eastern Michigan to just 16-50 (.320) shooting from the field and recorded 35 points off 26 EMU turnovers.

THE VIRGIN ISLANDS PARADISE JAM:
Miami travels to St. Thomas, Virgin Islands for the Paradise Jam Tournament being held, November 17-20, at the University of the Virgin Islands Sports and Fitness Center (2,500). Joining Miami in the six-team tournament will be Alabama-Birmingham, Clemson, Eastern Michigan, LaSalle and Morris Brown. The tournament will be broken down into two divisions with Miami, UAB and Eastern Michigan comprising the St. Thomas Division, and Clemson, LaSalle and Morris Brown making up the St. John Division.

Each team will play the other two teams in its division. After the divisional round robin competition is completed the No. 3 teams, No. 2 teams and No. 1 teams in each division will face off in the Championship round on Tuesday, November 20. The tie-breaking criteria for determining opponents for the championship round are: #1 – Net margin in all games, #2 – Total points scored in all games, #3 – Most three-point baskets in all games, and #4 – Most field goals in all games.

TV/RADIO COVERAGE:
Tonight’s game is not being televised. The game is being broadcast on the Hurricane Radio Network (WAXY-790 AM). Marc Vandermeer, entering his third season as the “Voice of the Hurricanes,” will handle the play-by-play duties while Joe Zagacki will provide in-depth analysis.

ON COACH PERRY CLARK:
University of Miami head coach Perry Clark is beginning his second season with the Hurricanes and 13th season overall as a collegiate head coach. Clark is 17-13 in his second season at Miami while his career record in 13 seasons stands at 202-158 (.561). Last season Clark led the Hurricanes to a berth in the National Invitation Tournament marking the eighth time in 12 seasons he has guided his team to post season play.

LOOKING FOR 1,000:
Miami seniors John Salmons and Elton Tyler are nearing the 1,000-point plateau for their careers. Salmons (883 points) needs 117 points while Tyler (578 points) needs 422 points this season. Miami has had 23 players score 1,000 or more points including Rick Barry who holds the Miami career scoring record with 2,298 points.

RICE FOR NAISMITH:
University of Miami sophomore DariusRice (Jackson, MS) has been selected as one of 30 preseason candidates for the 2001-02 Naismith College Basketball Player of the Year Award.

Rice averaged 14.1 points and 4.9 rebounds per game last season while posting 20 double-figure scoring games including a UM freshman record 35 points against Central Florida. Rice recorded a team-high 62 three-point baskets in 2000-01 and registered 31 steals and 14 blocks. Rice is one of three BIG EAST athletes recognized as a preseason candidate for the Naismith Award. Joining Rice on the list are Troy Bell (Boston College) and Caron Butler (Connecticut). The Naismith Awards program, now in its 34th year, honors the outstanding college basketball player in the United States. The awards program was founded by the Atlanta Tipoff Club, an organization dedicated to recognizing the achievements of student athletes in basketball.

MIAMI vs. NON-CONFERENCE OPPONENTS:
Since becoming the 10th member of The BIG EAST Conference beginning with the 1991-92 season, the Hurricanes have compiled a 63-35 (.643) record against non-conference opponents, including a 45-13 mark (.776) at the Miami Arena.

BIG OFF THE BENCH:
Last season the Hurricanes’ received strong play from its bench. The UM bench accounted for 30.1 percent (613 of 2039 points) of the Hurricanes’ scoring. Miami’s bench averagied 21.6 points per game. Miami was 8-1 last season when it’s bench scored 25 or more points.

MAN OF STEAL:
Senior John Salmons recorded three steals against Eastern Michigan improving his career total to 138. Salmons is tied for sixth on UM’s all-time career list with Steven Edwards (1992-96). Salmons’ 57 steals last season ranks as the fifth best single season total in UM history. Salmons is only the third player in UM history to record 50 or more steals in back-to-back seasons. Salmons is attempting to become the first Hurricane to ever register three seasons of 50 or more steals.

SALMONS, RICE HONORED IN 2000-01:
Last season, guard John Salmons was named third-team All-BIG EAST and forward Darius Rice was named to the All-Rookie Team by a vote of the leagues coaches.