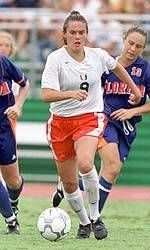 Bass was named to the All-BIG EAST Second Team. She started all 19 matches for the Hurricanes this season totaling four goals and two assists for a total of 10 points on the season.

Matthews was also named to the All-BIG EAST Second Team for the second season in a row. She played all 19 matches and was third in scoring with six goals and three assists for a total of 15 points.

Newcomer Butcher was named to the All-BIG EAST Rookie Team after starting all 19 matches and leading Miami in scoring with eight goals and eight assists for a team-high of 24 points.

The Hurricanes wrapped up the season with a 10-8-1 record overall and a 3-2-1 record for a third place finish in the Northeast Division.

Miami awaits an at large bid to the newly expanded 64-team bracket for the Division I Women’s Soccer Championship slated to begin Nov. 16 and 18.

The teams selected will be announced live at 3 p.m. Eastern time, Monday, November 12 on various regional sports networks and via the internet at ncaachampionships.com.

Third Rounds (8): To be determined (on campus)

Quarterfinals: To be determined (on campus)