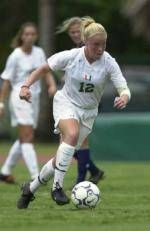 CORAL GABLES, Fla.–The University of Miami women’s soccer team will close out the regular season Wednesday night as they play host to South Florida at 7 p.m. at Cobb Stadium.

Miami (9-7-1) enters the contest on the winning path after downing Stetson 10-0 in a record-breaking performance on Sunday. The Bulls are 4-11-2 overall and enter the contest on a seven-match losing streak.

Newcomer Britney Butcher (Bothell, Wash.) has improved her game and now tops the Hurricanes with 21 points on the season. She has scored four goals in the last three games.

The Hurricanes have a total of 266 shots on the season, while USF has 183. UM has scored 42 goals this season, compared to 26 for the Bulls.

Tickets can be purchased on game day at Cobb Stadium, or the Hurricane Box Office-$4 for adults, $2 for kids 12 and under.