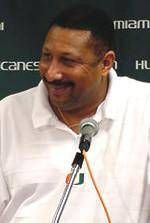 New York, N.Y. – (www.hurricanesports.com) – Miami is picked to finishthird in the Eastern Division for the 2001-02 BIG EAST regular season, accordingto a vote of the league’s head coaches. Coaches did not place their own teamson their preseason ballots.

Boston College is the pick to capture the East Division crown. The Eagles, whoearned six first-place votes, were the surprising East champions last season.BC recorded a 13-3 conference record — the best mark in either division — afterbeing tabbed for fifth place in last year’s poll.

Connecticut finished second to Boston College in this year’s balloting. The Huskies,who had been chosen to win the league or their division in each of the last fourseasons, received four first-place votes.

Miami edged Providence for third place, though each squad garnered two first-placevotes. They were followed by St. John’s, Villanova and Virginia Tech.

Georgetown was a near-unanimous selection to win the West Division, collecting12 first-place votes. The Hoyas finished ahead of Syracuse, a solid choice forsecond.

Last season, Connecticut was picked to win the East Division and Seton Hall wasthe choice in the West.

It’s 12 Again For New York
For the second year in a row, 12 of the BIG EAST’s14 teams will advance to the BIG EAST Championship in Madison Square Garden. Thetop six teams in each division will make the trip to New York.

For chances on winning the tournament, history remains on the side of teams earningbyes. However, in the last two years, two teams (Pittsburgh in 2001 and Connecticutin 2000) made it to the championship round by winning three games in three days.Both lost in the finals.