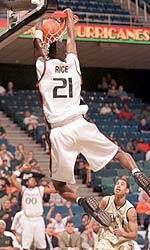 Question And Answer With Darius Rice

What was the most exciting thing you did this summer?
I worked the Michael Jordan Flight School

Do you have any pre-game rituals or superstitions?
I put on my headphones and listen to rap music

Who do you model my game after?
I like to think of myself as a Kevin Garnett/Scottie Pippen/Reggie Miller type of player. If I had to mold myself I would roll all three into one.

What current or former Miami athlete do you most enjoy watching perform?
Santana Moss and John Salmons

Where do you see your self ten years from now?
Hopefully, I will be playing in the N.B.A.

If you could play another sport at Miami, what would it be?
If I could play any other sport, I think I would want to play Football for the Hurricanes.