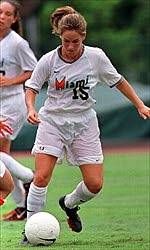 The Hurricanes fall to 8-4-0 overall, while the Panthers improve to 5-6-1 on the season.

Miami took a 1-0 lead into the lockerroom at halftime.

The momentum switched in the second half as the Panthers outshot the Hurricanes eight to six. Annette Agredano scored on a short pass from Jacqueline Reuter at 62:25 knotting the match one-all.

With time running out the Panthers continued to press and finally broke through as Katrina Shibata scored the game-winning goal at 83:29.

The Hurricanes return to action playing host to No. 5 Notre Dame Sunday at 1 p.m.