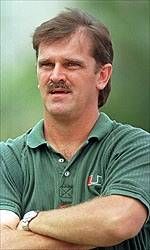 Miami is 0-2 against BC in the all-time series and has been shutout by the Eagles in both matches.

UM leads the Friars 2-0 in the all-time series, shutting them out in both matches.

The Hurricanes are currently in second place in the BE Northeast Division poll behind by No. 9 Connecticut.

BC and PC are tied for the No. five spot with no conference wins on the season.

Junior Laura West (Allen, Texas) currently leads the team and the BIG EAST with seven goals and three assists on the season.

West needs five more goals on the season to break the single-season record for goals scored, currently held by senior Jennifer Sanchez with 11 goals during the 1998 season.