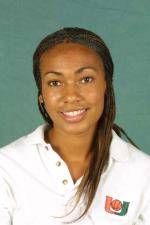 At what age did you start playing basketball and why?
When I was 13 years old, because it was offered at my grade school and I decided to play. My older sister was playing and I wanted to play as well.

Who in your family do you idolize?
Both of my parents, they have helped me out so much and been so encouraging and supportive of me.

What basketball player did you pretend to be as a kid?
Michael Jordan, they did not have the WNBA when I was a kid so I grew up watching the guys play.

Who do you think is the greatest player at your position?
Allen Iverson, when he plays the shooting guard, I am a huge 76ers fan.

What do you like to watch on television?
Well, I don’t really watch TV too much, but when I do I love to watch Martin, men’s and women’s college basketball and professional football.

Some people would be surprised to learn this about you?
In school I started playing soccer first, I was playing soccer from the time I was four years old until last year. I love soccer.

Worst feeling you have ever had in basketball?
My sophomore year in high school playing in the National Championship game, we lost by one point and we were up by three points with 10 seconds to go in the game. We did not make it to the Elite Eight that year.

What was your impression the first time that you visited Miami?
It was so beautiful! It reminds me of a giant golf course and the weather is wonderful, it is just really nice.

What two traits would you like to borrow from two of your teammates?
I would borrow Chanivia’s (Broussard) friendly and outgoing nature and Hutashi’s (Wilson) kindness.

Your house is on fire. Your family is safe. What items do you go back in and get?
I would go in and get my clothes and all my trophies.

One athlete or entertainer you look at and say, “I wish I had his or her life”?
I would like to have Lisa Leslie’s life. She’s great at basketball and she’s so beautiful she can also model.

You are stuck on an island forever. Pick one CD, one book and one person?
I would pick Life After Death, by Jay Z, a book of poetry and Allen Iverson.