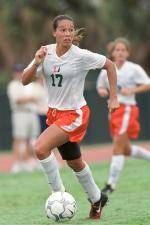 Bass, a senior defender, was also named BIG EAST Defender of the Week. She was instrumental defensively and offensively in Miami’s 3-0 week. She anchored a defense that posted two shutouts and allowed one goal and just 14 shots in wins over Florida Atlantic (3-0), Central Florida (4-1) and No. 20 Florida (1-0).

Bass scored the gamewinner against the Gators to give the Hurricanes their first win over a ranked opponent.

The Hurricanes have moved into the NSCAA/adidas National Rankings at No. 14 and are ranked No. 15 in the Soccer America poll.