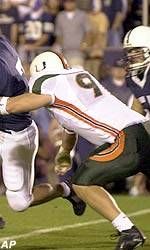 Ken Dorsey threw three first-half touchdown passes and No. 2 Miami scored on six of its first seven possessions in a dominating 33-7 win over Penn State on Saturday night.

The Hurricanes kept Nittany Lions coach Joe Paterno at 322 career wins – one shy of Bear Bryant’s major-college record. They did it by equaling the largest margin of victory over Penn State at home in Paterno’s 26 seasons as head coach.

On an emotional night inside Beaver Stadium, a record crowd of 109,313 stood and cheered as once-paralyzed Adam Taliaferro hopped and skipped onto the field before the game. Taliaferro, wearing his No. 43 jersey and blue sweat pants, was injured against Ohio State last season and it was feared he might never walk again.

But when the season-opener for both teams began, the night belonged to the Hurricanes, who turned Larry Coker’s coaching debut into a rousing success. In the first half alone, Dorsey hit 12 of 18 passes for 205 yards, including TD tosses of 27, 28 and 10 yards to three receivers.

Miami, coming off an 11-1 season with a chip on its shoulder after being left out of the national title game, is off and running for another championship. The Hurricanes were faster, quicker and stronger than the Nittany Lions, who finished last season with only their second losing season under Paterno.

“We were terrible on some basic things early in the game,” Paterno said. “It’s hard to get used to that kind of speed.”

Todd Sievers kicked field goals of 35, 42 and 37 yards as Miami built a 30-0 halftime lead. So overpowering were the Hurricanes that the Lions didn’t complete their first pass until 1:20 remained in the half. Sievers added a fourth field goal – a 23-yarder with 12:22 left in the game.

Dorsey started his Heisman Trophy campaign by finishing 20 of 27 for a career-best 344 yards. He was intercepted once. Clinton Portis carried 17 times for 164 yards – 13 for 136 in the first half – as he ran behind the crunching blocks of 6-foot-9, 335-pound left tackle Bryant McKinnie.

Dorsey said the Hurricanes tried to forget about the hype surrounding the game.

“We tried to block it out,” he said, “because if you use it as fuel there is a chance of it backfiring.”

No offense, but the Lions had none against Miami. Matt Senneca, a junior making his first start, was sacked twice in the first half and had at least two passes knocked from his hand while trying to throw. He left briefly in the first half with a bruised right elbow, and freshman backup Zack Mills was just as ineffective.

Senneca left for good early in the third quarter, and Mills played the rest of the game. The Lions avoided being shut out for the first time at home under Paterno when Mills threw a 44-yard TD pass to Bryant Johnson with 9:51 left in the game.

Sievers opened with a 35-yard field goal 5:30 into the game, and Penn State then fumbled away a scoring chance. Larry Johnson returned the kickoff 69 yards to the Miami 31 but two plays later Omar Easy fumbled and free safety James Lewis recovered for the ‘Canes. It was the closest the Lions came to scoring in the game.

Dorsey, whose quick setup and release had Penn State defenders struggling to cover receivers, came back with completions of 9 and 17 yards to Jeremy Shockey that moved Miami to the Penn State 48. Portis ran for 21 yards and Dorsey found a wide open Ethenic Sands for a 27-yard TD with 7:23 left in the period.

Sievers kicked field goals of 42 and 37 yards on Miami’s next two possessions before Dorsey clicked with fullback Najeh Davenport on a 28-yard scoring pass. Like Sands, there was not a Penn State defender within 10 yards as the lead increased to 23-0.

After its first punt – with 8:08 left in the half – Miami held again. Dorsey and Shockey hooked up three times on the next drive, the final one a 10-yard TD pass with 1:48 to go in the half.