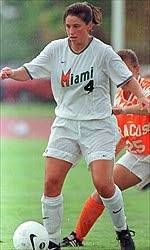 Britney Butcher (Bothell, Wash.) picked up her third pre-season assist as she assisted McWhinney at 49:02 putting the Hurricanes up 2-0.

The Dolphins scored a goal at 53:00 as Yvonna Rowinski scored on an assist from Dianne Herlihy.

Freshman Gitana Gotay (Sandy, Utah) scored a goal at 79:11 on an assist from West.

The Hurricanes had 30 shots on the day, while JU took four.

“I was very pleased with the overall effort from the team today,” said head coach Jim Blankenship. “We had a positive and encouraging pre-season, we are looking forward to the start of the regular season.”

The Hurricanes open the 2001 season at the Florida State Tournament in Tallahassee, Fla. Aug. 31-Sept. 2. Miami takes on Loyola at 4:30 p.m. on Friday.