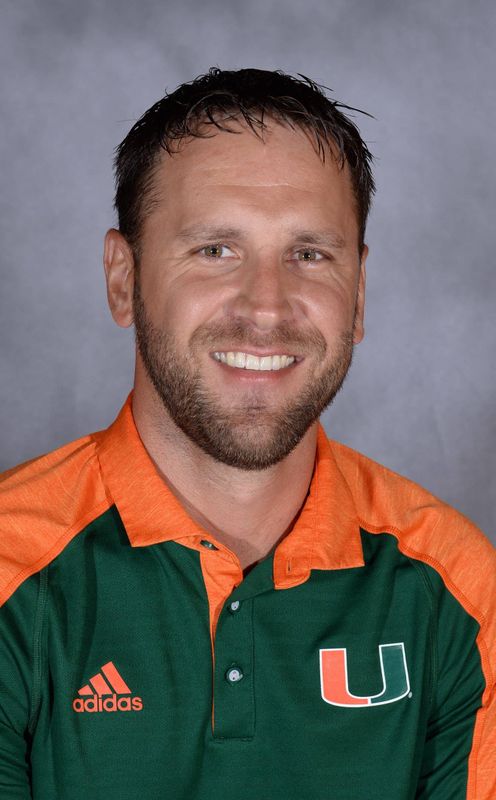 John Koskinen is in his 12th season with the University of Miami women’s golf program and his fifth as the associate head coach under the direction of head coach Patti Rizzo.

In 11 seasons at Miami, Koskinen has played major roles in the recruitment of top athletes around the world, including Leticia Ras-Anderica of Spain, Rika Park of Japan, Daniela Darquea from Ecuador and Dewi Weber from the Netherlands.

Following the COVID season, the Hurricanes found themselves right back in the NCAA Regionals for the ninth year in a row with assistance from Koskinen. The year was highlighted by freshman Nataliya Guseva who was tabbed ACC Freshman of the Year and an All-ACC Team selection. Guseva earned a spot in the NCAA Championships and top-10 finish at the ACC Championships (sixth) in her first year as a Cane. The Moscow, Russia, native tallied the second lowest season scoring average, 71.44, in school history with the help of Koskinen. The freshman recorded a top-10 finish in four of seven tournaments she competed in.

Joining the success of Guseva was Renate Grimstad who was garnered a Second-Team All-American, the sixth player under Rizzo to collect all-american honors. As a team, Miami notched three top-five team finishes.

In a season shortened by COVID-19, Miami posted eight top-10 individual finishes in 2019-20 in seven tournaments. The Canes notched 18 top-15 program marks on the year. Renate Grimstad and Anna Backman highlighted the season, each earning a tournament title. UM capped off the fall with a third-place finish at the Jim West Challenge with a score of 848 (16-under).

During the 2018-19 season, the Hurricanes reached NCAA Regionals for the seventh straight season and set several program records during the year. The Hurricanes set five school records at at the Schooner Fall Classic and Illini Invitational. In Norman, Miami set the program marks for lowest three-day total (833), two-day total (542) and one-day totals (267 and 275) on a par-71 course. At the Medinah Country Club golf course, the Canes scored the lowest par-72, 54-hole total (846) in program history.

In 2017, Miami earned a trip to the NCAA championship for the second straight year (25 appearances overall). In addition, Miami finished in the top five in 10 tournaments and helped guide the Hurricanes to their best finish at the ACC championship in program history, as the team placed third.

During the 2015-16 campaign, Koskinen helped guide Miami to one of the most successful seasons in program history as the Hurricanes earned a spot in the 2016 NCAA Championship – its first trip to the national tournament since 1992.

Miami clinched its 24th trip to the national tournament following a fifth-place finish at the NCAA Bryan Regional.

During the 2014-15 campaign, helped guide the Hurricanes to seven top finishes, including a tournament victory at the Florida Challenge. Following the regular season, the Hurricanes qualified for their third straight NCAA Regional Championship.

In 2012-13, Koskinen helped Rizzo guide the Hurricanes to their first NCAA Regional appearance in 2005, finishing 21st at the 2013 NCAA West Regional hosted by Stanford.

Under Koskinen’s guidence, Miami also has seen a rise in its ranking. Prior the start of the 2011-12 season, the Hurricanes were ranked 112th by Golfstat. By season’s end, the team finished at No. 59, an increase of 53 spots.

Prior to arriving at Miami, Koskinen spent the 2009-10 season on Rizzo’s staff at Barry University.

The Baraga, Mich., native brings a wealth of playing experience to Coral Gables highlighted by two appearances in the U.S. Open in 2006 at Winged Foot, and 2007 at Oakmont. Koskinen also competed on the Hooters Tour summer and winter series finishing second on the 2006 winter series money list.

Koskinen graduated from Michigan State University in 2003, excelling on both the golf course and in the classroom. The kinesiology major was a two-time Academic All-American as well as a member of the All-Big Ten and All-Midwest Region first teams. He earned the status as the top member of the Spartans golf team for more than 18 months. Following graduation, Koskinen stayed in East Lansing to work with the Michigan State golf team as an assistant coach in 2003.

John has one child, son Jentz.