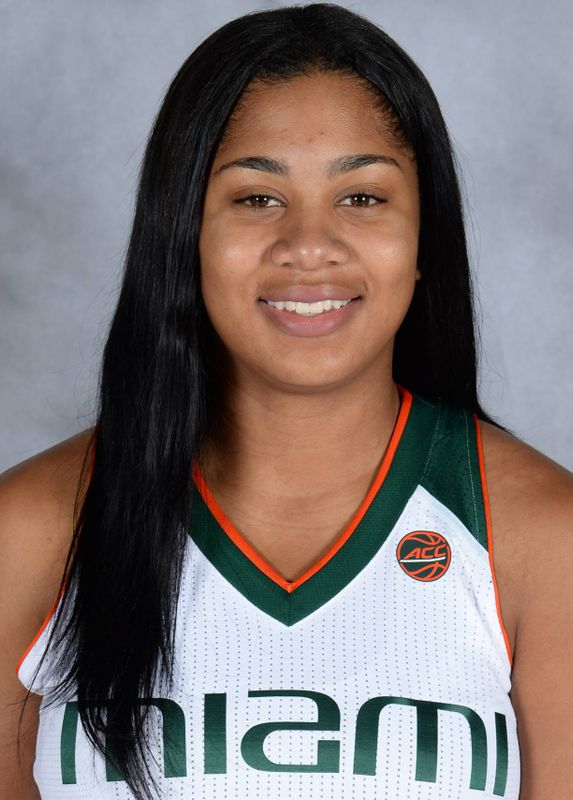 As a Redshirt Junior (2016-17): Played in all 33 games and earned a pair of starts … Averaged 3.3 points and 1.7 rebounds in 10.1 minutes per game … Shot 36-of-43 from the free throw line, to post a team-best (no min.) clip of 83.7 percent and rank fourth in makes … Co-led Miami in rebounding on one occasion … Notched a pair of rebounds in seven minutes of action her Miami debut at No. 19/19 Kentucky (11/11) … Scored her first three points as a Hurricane and logged a co-season-high two steals versus Albany (11/13) … Registered four points, three rebounds and her first two assists as a Hurricane in the home opener against Charlotte (11/16) … Notched four points and the first blocked shot of her career at St. John’s (11/20) … Logged nine points on 4-of-5 shooting and a season-high-tying two steals versus Grambling State (11/25) … Registered seven points and a season-high-tying two assists against Loyola Chicago (12/6) … Scored six points in her first ACC road game at Pittsburgh (1/2) … In her first start as a Hurricane versus North Carolina (1/26), set season highs in points (17), rebounds (six), minutes (24), field goals made (seven) and field goals attempted (10), plus tied her season best with two assists … Scored Miami’s first nine points against the Tar Heels, matching her highest mark in any other full game … Also earned the starting nod against Boston College (1/29), logging four points … Posted six points and made all four of her free throw attempts at fifth-ranked Florida State (2/6) … Registered eight points and went 4-of-4 from the stripe in the regular season finale against Georgia Tech (2/26) … Totaled eight points, a co-game-high five rebounds and a season-high-tying two assists versus Georgia Tech (3/2) in the ACC Tournament opener.

As a Junior (2015-16): Transferred from Florida Atlantic University … Sat out season due to NCAA transfer rules.

As a Freshman at Florida Atlantic (2013-14): C-USA Freshman of the Week (3/3/14)
Played in all 30 games with five starts and scored double digits seven times, including in three of the final five games of the season … Finished second on the team in field goal percentage (48.6), third in offensive rebounds (50), fourth in rebounds per game (3.6), fourth in free throws attempted (64) and fifth in free throws made (41) … Made her college debut at Akron (11/8), scoring two points in five minutes … Poured in 15 points on 6-of-9 shooting in just 15 minutes in a win over Florida Memorial (11/16), also recording her first career blocked shot … Logged nine points, nine rebounds and a season-high four steals in a double overtime victory against UCF (12/13) … Scored eight points in her first career start, a win over Bethune-Cookman (1/2) … Started and posted 11 points in a win against Rice (1/11) … Tallied 11 points in only 13 minutes in a victory over North Texas (1/25) … Recorded her first career double-double with 14 points on 7-of-13 shooting and 10 rebounds at FIU (2/1) … Scored a season-high 18 points on 6-of-9 shooting in just 20 minutes against Southern Miss (2/22), while also tying her season high with four steals and making the first 3-pointer of her career … Played a season-high 24 minutes and logged a double-double with 13 points and a season-best 15 rebounds, the highest total by an Owl all season, in a win at Marshall (2/26), while also shooting 7-of-10 at the free throw line, both season highs … Netted 11 points and pulled down seven rebounds in the first round of the C-USA Tournament against Marshall (3/11).

High School: Graduated from University Christian School … Ranked among the top 250 prospects in her class by Collegiate Girls Basketball Report … Listed as a three-star recruit by espnW HoopGurlz … Scored over 1,000 points in her career … Selected to the FABC/Source Hoops 3A All-State Team as a senior … Named to the Florida Times-Union All-First Coast First Team as a senior, the second team as a junior and the third team as a sophomore and freshman … Helped team to a 44-8 record over her final two seasons and won the district title both years … Attended West Nassau High School as a freshman and led the 3A state classification in scoring … Lettered in track and field all four years of high school and finished fourth in the 2A state high jump finals as a sophomore … Earned a letter in volleyball as a freshman … Member of the National Honor Society.

Personal: Full name is Shaneese Renae Bailey … Born Sept. 15, 1994 … Parents are Ken and Alma Bailey … Mother is a physical education teacher … Has an older sister, Shayla, and an older brother, Shannon … Cousin of former NFL players Champ Bailey, a 12-time Pro Bowl selection, and Boss Bailey … Majoring in communication studies … Favorite athlete is Kobe Bryant because he will do whatever it takes to win … Best sports memory is signing with Miami … Chose Miami because of its atmosphere of both family and competition on the court and in the classroom … Committed to Miami over Auburn, St. John’s, USF and Temple.