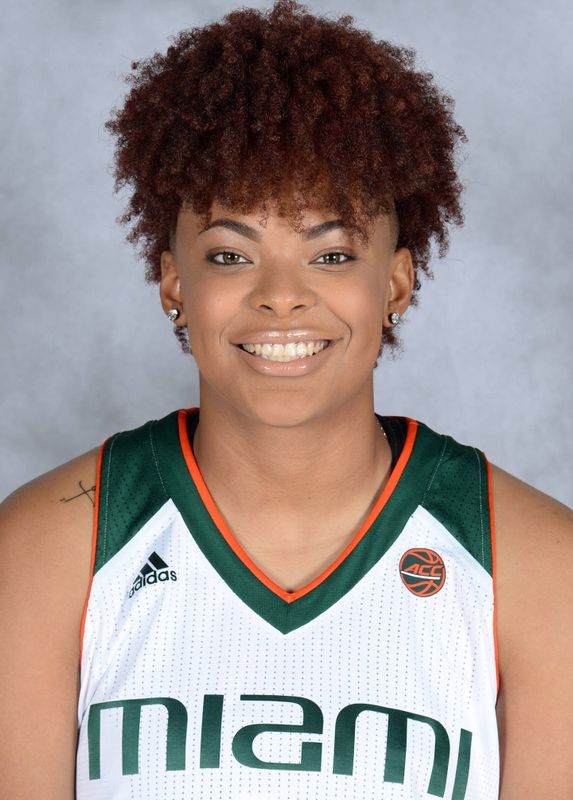 As a Freshman (2015-16): Played in 21 games and finished the year with 38 points and 34 rebounds … Shot 48.5 percent from the floor, good for the eighth-best mark among ACC freshmen with at least 30 field goal attempts … Committed just five turnovers … Made her Miami debut at Old Dominion (11/17), grabbing one rebound … Posted three boards and scored the first points of her career against Milwaukee (11/27) … Pulled down five rebounds versus UMass Lowell (12/6) … Set season highs in points (seven) and rebounds (six) in Miami’s victory over FIU (12/22) … Played a season-high 12 minutes at Clemson (1/10) and attempted a season-best eight free throws … Scored five points in just eight minutes on the road at third-ranked Notre Dame (2/14) … Posted six points in eight minutes of play against No. 10/10 Louisville (2/25).

High School: Graduated from Lake Wales High School … Ranked as a three-star recruit by espnW HoopGurlz … FABC/Source Hoops 6A Second Team All-State and PolkPreps.com First Team All-County as a senior … McDonald’s All-American Game nominee … As a team captain, led her team to a 19-4 record as a senior, including 9-3 in conference play … Named First Team All-County by PolkPreps.com as a junior after averaging 16.2 points, 10.0 rebounds and 4.0 assists per game and was selected to the second team as a sophomore … Helped her team to a regional championship game appearance as a sophomore … Tabbed as the Region 13 5A Player of the Year as a freshman … Earned one varsity letter in volleyball and one in track and field … Named to the honor roll.

Personal: Full name is Zada Keandre Williams … First name is pronounced ZAY-Duh … Born Dec. 12, 1996 … Parents are Kindreek and Andrea Williams … Father is a teacher and mother is a guidance counselor … Has a younger sister, Zaria … Intends to major in chemistry on a pre-med track … Career goal is to work in forensic science … Favorite athlete is LeBron James … Best sports memory is making the regional finals as a sophomore … Chose Miami because of its blend of great academics and a great basketball experience … Committed to Miami over Auburn, LIU, Southern Miss and Virginia Tech.