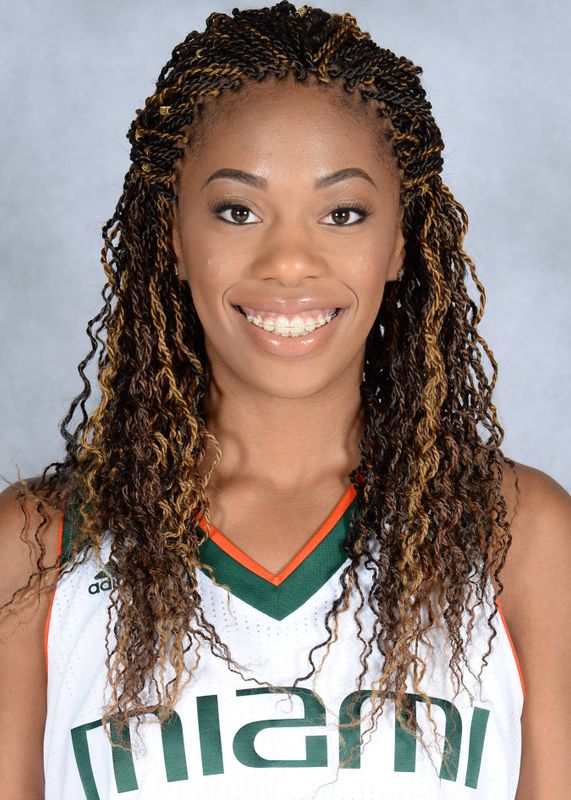 As a Sophomore (2015-16): Played in all 33 games, starting the first 11 contests and the final 10 for a total of 21 … Scored in double figures seven times … Lone Hurricane to tally five blocked shots in a game and tied for the most rebounds (15) and steals (five) on the team in a game all season … Led Miami in defensive rebounds (3.6) and finished second in blocked shots (25) … Ranked third on the team in field goal percentage (51.2) and rebounding (5.2) … Fourth among Hurricanes in offensive rebounding (1.6) and free throws attempted (72), as well as fifth in steals (31) … Made her first-career start in the season opener against Wright State (11/13) … Nearly recorded a double-double with 10 points on 5-of-6 shooting and a co-game-high nine rebounds at Old Dominion (11/17) … Led the Hurricanes in rebounding for the second game in a row with nine at Loyola Chicago (11/21) … Scored 12 points, recorded four steals and blocked two shots versus La Salle (11/29) … Recorded double-digit points in back-to-back games for the first time in her career with 10 against both Coppin State (12/4) and UMass Lowell (12/6) … Posted 11 points in Miami’s victory over FIU (12/22) … Tallied 12 points at Clemson (1/10) … Finished with nine points and a co-team-high seven boards at Virginia Tech (1/28) … Led all players with eight rebounds against eventual NCAA runner-up Syracuse (2/1) … Scored eight points and grabbed a game-high nine rebounds versus Boston College (2/4) … Set a career best with a game-high 15 rebounds in the Hurricanes’ victory over Duke (2/7), marking her fourth straight game with at least seven boards … Logged 12 points on 5-of-7 shooting blocked a pair of shots in her first-career game in her home state when Miami won at Georgia Tech (2/11) … Tied for the team lead with seven rebounds against Virginia Tech (2/21) … Registered nine points, seven rebounds, a game- and career-high five steals and two blocks at No. 12/12 Florida State (2/28).